For the last few months, I’ve been writing a handful of small utility plugins (for lack of a better word) for WordPress. These are things that are designed to do at least one of the following:

As someone who’s historically been one to go on and on about why we should be using object-oriented programming, I’ve not been doing much of that in these plugins.

Instead, I’ve been using some features of PHP, like namespaces and autoloading, to keep the code running in its own area to prevent potential conflicts with other plugins. I’ve also been using PSR12 with procedural programming.

For as much as I’ve written about object-oriented programming, I don’t think I’ve written enough (and I certainly won’t do so in a single post 🙂) about procedural programming.

But that doesn’t mean now isn’t as good as time as any.

END_OF_DOCUMENT_TOKEN_TO_BE_REPLACED

Modern Software Engineering in WordPress (We Were on a Break)

Over the past few years, I’ve spent a significant amount of time writing about a lot of things on how to achieve certain things in WordPress. And I don’t regret it (after all, it’s my career and it’s even the subtitle and focus of this blog).

But one of the things that I’ve opted to neglect is a focus more on topics that interest me such as object-oriented analysis, programming, design, and implementation. (And, of course, doing so within the context of WordPress.)

And sure, there are some articles where I’ve touched on it but I recently took a week off of pretty much everything except my [growing] family and during that time, I took stock of a variety of things.

One of those things included this particular site, its content, and the general focus of my career.

END_OF_DOCUMENT_TOKEN_TO_BE_REPLACED

If you’ve read this blog for any length of time, specifically in the last two or three years, then you know I’m a fan of object-oriented programming especially so in the context of WordPress.

And if you’ve followed me on Twitter, you know that – like many of you – I’ve met many people who I consider to be legitimate friends (versus the bastardization of the phrase by sites such as Facebook)

On top of that, you know one of my favorite past times on Twitter is trolling said friends. So far, though, this entire post is all about my friends and me and, ahem, trolling.

So what’s the point?

Ultimately, it’s to give you a heads up something that’s been released today, that’s been a long time in the making, that’s finally available, and that’s going to help anyone who wants to be a better WordPress developer.

END_OF_DOCUMENT_TOKEN_TO_BE_REPLACED

When it comes to creating classes for WordPress plugins, I’ve been asked about why I bother separating functionality into subscribers and into other classes.

I think this is a good question because it helps to understand two things:

So I thought why not respond in the form of a short post? It’ll document the why behind the what [and it will give me a place to update if things change in the future].

END_OF_DOCUMENT_TOKEN_TO_BE_REPLACED

When I set out to create a members-only section of my website, it was to do two things:

Periodically, I do get questions about the content that I’ve produced thus far. If you’re interested in reading the full, detailed list, you can see them here. 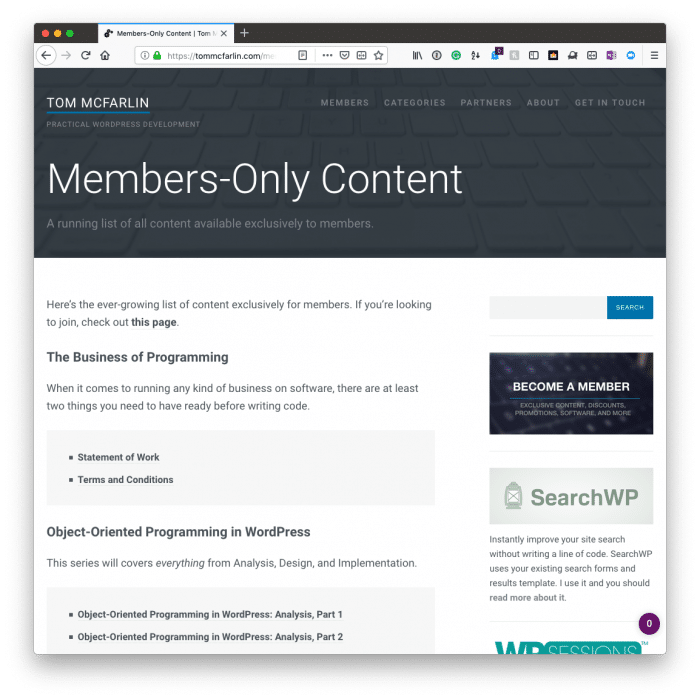 But the gist of what I have so far is here: