If you’ve read this blog for any length of time, specifically in the last two or three years, then you know I’m a fan of object-oriented programming especially so in the context of WordPress.

And if you’ve followed me on Twitter, you know that – like many of you – I’ve met many people who I consider to be legitimate friends (versus the bastardization of the phrase by sites such as Facebook)

On top of that, you know one of my favorite past times on Twitter is trolling said friends. So far, though, this entire post is all about my friends and me and, ahem, trolling.

So what’s the point?

Ultimately, it’s to give you a heads up something that’s been released today, that’s been a long time in the making, that’s finally available, and that’s going to help anyone who wants to be a better WordPress developer.

For years, I’ve had the pleasure of knowing Carl Alexander both via the web and having him stay at my house (during which he was kicked in the face by Toby – true story).

He’s been working on a book for a long time, and today it’s finally available. 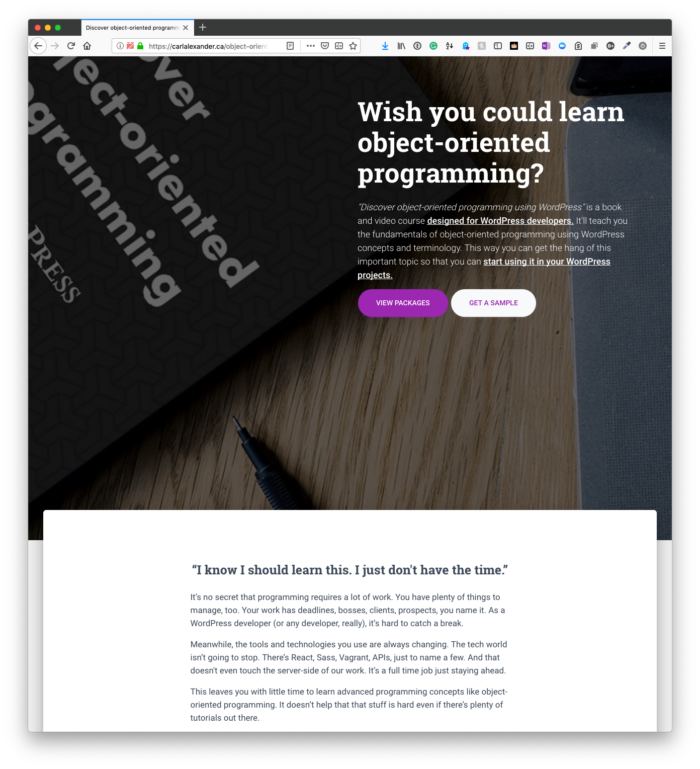 Sure, the site explains exactly what you can expect:

And, sure, you may read this as a post in which I’m just writing promotional content as if it’s sponsored. It’s not.

Remember that campaign slogan from The Dark Knight?

I Believe in Harvey Dent

Maybe this sounds cheesy, but here it is: Suffice it to say that I believe in Carl Alexander. No, I don’t think he’ll become a political villain or anything like that (he’s too nice, and he’s Canadian 🙃).

Seriously, though, I truly believe in the book, the content he’s produced, and the benefit it will provide to you or your team.

Finally, I’ve had the pleasure of not only knowing Carl and simply talking with him about the topics in this book but also working with him on projects.

Taught me everything? Maybe. Taught me a lot? My perspective on developing object-oriented solutions wouldn’t be where they are today were it not for Carl.

This isn’t just another eBook. This is something that should be a staple in any software developer’s library which work in WordPress.