Yesterday, we released Easier Excerpts 1.1.0 into the WordPress plugin repository. 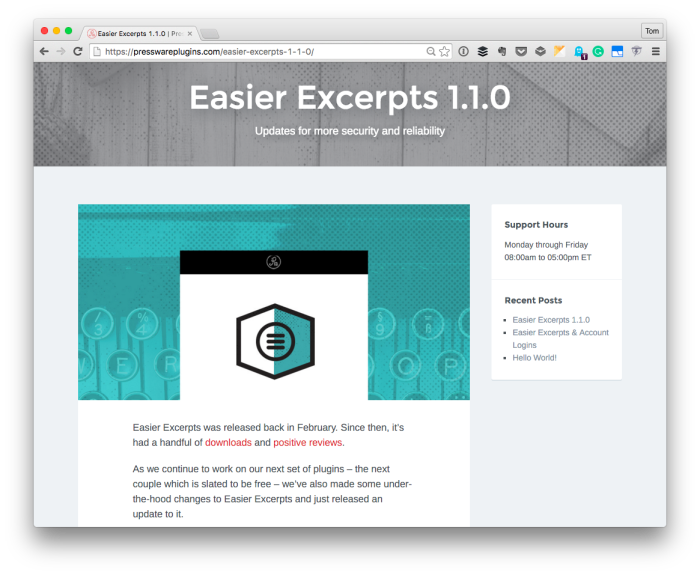 In short, this update includes a lot of updates to the code of the plugin without a lot of user-facing functionality. But it does lay the foundation for future updates to this plugin along with how we’re going to be building plugins that we’ll be releasing moving forward.

Though we cover a bit more about the plugin itself in the official blog post, I thought I’d cover more technical details of the changes in this post.

Far too often, installing plugin updates is a set of unclear notes about what’s new and is a gamble as to if they will break when they are installed.

The changelog is also available for review in the WordPress Plugin Repository. Though I’m not a fan of changelogs that contains messages like:

I also know that highly technical changelogs are just jargon to the end user. This may sound a little weird given that this latest update includes many technical details.

But I’m okay with that given that it’s the first plugin, and we’re working on defining an approach for how we’ll be moving forward with this plugin as well as our future plugins.

The gist of the changes are that:

For the typical end-user, these types of changes will not impact the performance of the plugin, nor will it introduce any new visual element.

It will, however, make it possible for us to add features in the future in a way that won’t cause problems with pre-existing features. That is, unit testing allows us to write new tests and new code all the while running tests that we’ve previously written to make sure that nothing breaks with the new code.

Furthermore, using dependency management and command-line level scripts via WP-CLI allows us to continue making sure the plugin includes only the files that are needed but allows us as well as other developers to set up the environment needed for testing and for forking the plugin if needed.

Finally, this is the approach that we’re planning to take with plugins that are both free and premium. Speaking of which, we have a few free plugins scheduled for release before releasing our first premium plugin. Naturally, I’ll cover all of this in a future blog post.

For now, though, the updates for Easier Excerpts are available in the repository and also show the approach that we’ll be taking with future work.