You Should Come to WordCamp Atlanta 2017

Last year, I had the opportunity to attend WordCamp San Diego, WordCamp Atlanta, WordCamp US, and several local meetup groups and enjoyed my time at all of them. This year, I’m trying to spend less time attending conferences and speaking for a number of reasons (all of which really have to do with wanting to focus on work-related stuff). 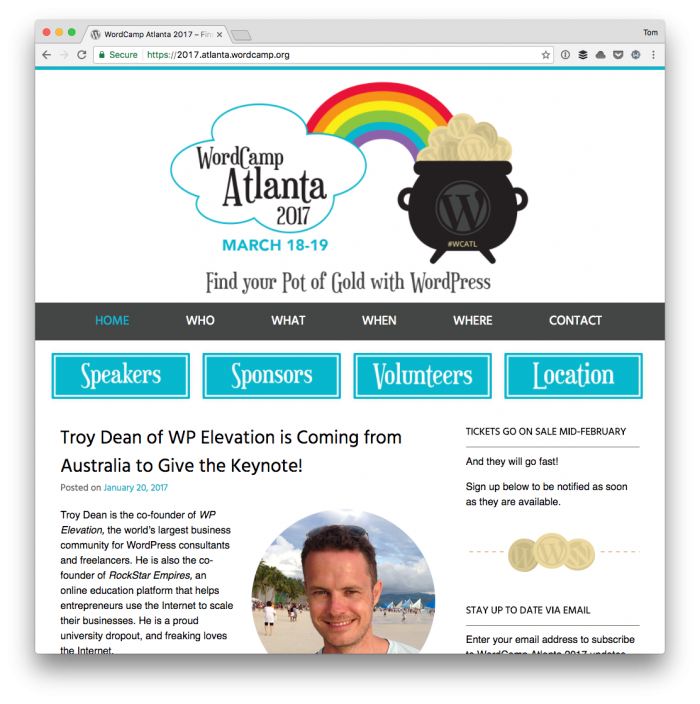 Since I live just outside the city, though, I’ll be at WordCamp Atlanta 2017. Further, I’m looking forward to speaking on the developer track.

Though the conference isn’t until the middle of March (the 18th and the 19th, actually), but I like to try mention to those who I know in case they are interested in attending. It’s always a lot of fun to meet people face-to-face and hang out with those who you’ve seen at other WordCamps. Case in point: Last year, Meghan and I had the chance to host Daniel Espinoza and his family along with Brian Richards and his family.

It’s also a good time to hear what our peers are doing in the industry and learn from them, too. As mentioned, I’ll be speaking on the developer track. Specifically, I’m going to be talking about improving WordPress plugin architecture via namespaces, autoloading, and some other object-oriented techniques.

As stated on the Sessions page:

In this presentation, I walk everyone through namespaces and autoloading, explain how they work, why they are beneficial, and then will show sample example code on how it works. I’ll also provide a downloadable plugin that they can use to study.

It’s arguably the most exciting topic you’ve read, right? Still, it’s one of those things I think is important and will be fun to tackle and make an interesting presentation out of it.

Of course, as with most WordCamps, there are other talks like those for designers, bloggers, business owners, and more. If you’re coming, don’t hesitate to say hey. Maybe we’ll get a chance to hang out at the conference.