Earlier this week, I received a following forum notification in my inbox regarding Tag Sticky Post:

I’ve downloaded the plugin Tag Sticky Post that will allow me to stick posts depending on which tag I’m currently browsing in my blog. The tag that will be checked is from the post’s custom_field “tag_sticky_post”. So, if I go inside the post and set post “A” to stick on tag “1”, if I go to http://www.myblog.com/tag/1 the post “A” will be shown on the top with a custom css class (to highlight it). So far so good.

The problem is that the plugin can’t seem to work when I’m browsing archives for 2 tags at the same time, like the example I gave above:

This prompted an update to the plugin that I’ll discuss in more length in another post, but first note that this particular use case provided a perfect example of the type of enhancement that fit with the vision of the plugin.

END_OF_DOCUMENT_TOKEN_TO_BE_REPLACED

As the release candidates of WordPress 3.5 were being release, I spent time updating my plugins to make sure they were fully compliant with the latest version. Specifically, I’ve been trying to patch any outstanding bugs and issues before working on new features.

Since the plugins are so similar, I’m covering updates for both plugins in this post.

Because both plugins serve the same purpose save for the taxonomy on which they operate, the updates are nearly identical. That said, only a single new feature has been introduced:

Since users often want to style the look and feel of their plugin to match the color scheme of their blog, this particular solution works as it conditionally introduces a stylesheet that will only be added if it doesn’t already exist.

That means that if an update occurs, a user won’t lose their styles.

The outstanding issues that exist that are now resolved are:

As of now, there’s nothing on the roadmap other than making sure the plugins continue to be compliant with WordPress best practices. They are narrowly scoped plugins that attempt to solve a very specific need without feature bloat.

That said, I’m always up for suggestions and comments so feel free to shoot them my way.

Yesterday, I released two plugins for WordPress – Category Sticky Post and Tag Sticky Post – both of which serve the same purpose:

Allows authors to mark a post to be placed at the top of a specified archive. It’s sticky posts specifically for an archive.

The only difference is that one is specifically intended for category archives, the other with tag archives. And thus explains the clever names of each of the plugins.

END_OF_DOCUMENT_TOKEN_TO_BE_REPLACED 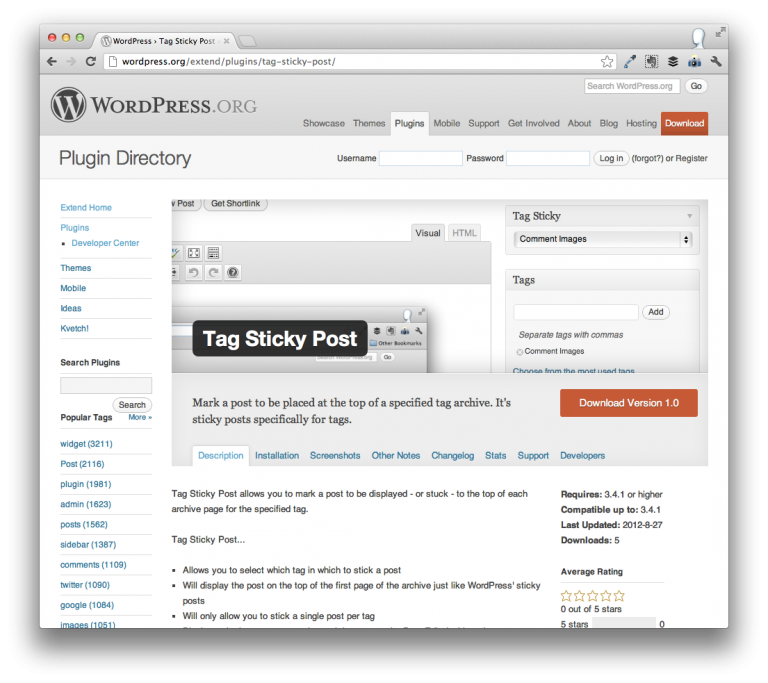 Tag Sticky Post for WordPress is a plugin that allows you to mark a post as sticky within a specific tag archive. It works exactly like the typical sticky post functionality within WordPress, except that it’s specifically for tag archives.

This means that if you have a set of articles under one tag, you can mark one to always appear at the top of the tag archive.