The Good Old Days of WordPress (Yesterday, Today, and Tomorrow, Too)

TL;DR: If you’re a drive-by reader coming from Google or another search engine, this probably isn’t the type of post you’re looking for (insert the Obi-Wan meme here). But if you’re someone who’s read this blog for any length of time, then feel free to stick with me for a bit.

I’m writing this post in the Classic Editor and it’s the first post in a very long time that I’ve used said editor.

Instead, I just felt like using the Classic Editor. It’s comfortable because I’m used to it and it works really well. I also use the Block Editor which is a bit uncomfortable because I’m not as used to it and that doesn’t work as well because it’s still in its infancy [but it’s maturing daily and it’s going through more testing at a faster rate than the Classic Editor likely ever did]. 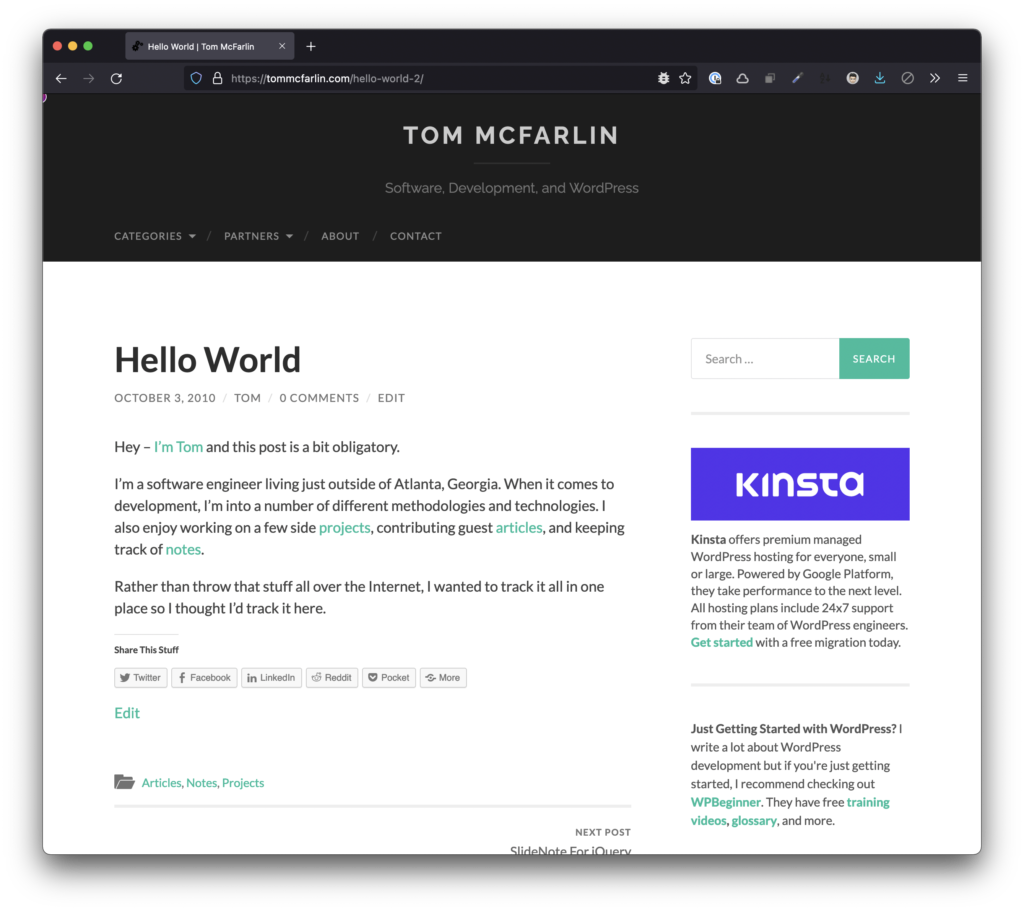 And this is somewhat of a metaphor for what I’m going to talk about in the rest of the post. So if you’re ready for a little bit of a longer article than usual – and one that isn’t as technical – keep reading.

The Good Old Days of WordPress

A few years ago, I’d gotten into a rhythm of blogging nearly every single day for year (or years) on end. Sometimes I miss that and I want to get back to it, but other things have come up in life – moves, more kids, additional responsibilities, and so on – generally, all good things, right?

And when I look back at the that time during my time in WordPress, it’s combined with a number of other things that I was doing far more regularly than I do now:

I was particularly interested in the idea of using WordPress as an application foundation for building larger scale applications – be it web applications, de-coupled applications (or maybe headless is the better term here?), or even using it as a back-end with which mobile applications could communicate to share their information.

During this time, I almost met a lot of great people via Twitter and at conferences and meetups and generally just around. If you hang out in a proverbial community long enough, you’re ultimately going to run into people in the world that you’ve talked with online or heard about through someone else.

The paragraph you’re reading, I’ve rewritten several times because I’ve debated whether or not to try to summarize some of the stories. I’ve opted not to do so. But that’s the cool part of it: There are too many to share because there’s so many great people and I’d inevitably leave someone out which is something I don’t want to do (and I’ve done before, unfortunately 😕).

Here’s the first point I’m trying to make, though: This is the point in a post where it’s easy to get really nostalgic and start to talk about how things have changed and how they aren’t the same as they were a few years ago. [Insert clip of The Office here but don’t actually do it in case the video is, at some point deleted.]

I wish there was a way to know you’re in the good old days before you’ve actually left them.

But this isn’t a nostalgia play and this isn’t a look back at how things one were and how they are and how I wish they were different. No way. It’s possible to look back at where you were, enjoy it, and enjoy where you are now, and look forward to what’s next even if you don’t know what that is.

More succinctly, that’s where I was then.

Things are different now. I don’t participate in as many podcasts, I had started to decrease my participation in WordCamps and meetups (before 2020 and the pandemic, even), and I’d started to work for other organizations in the WordPress-space rather than on solely on my own.

My life was changing. We were having kids, and they are growing, we were looking to move, I wanted to be engaged not only in the lives of our kids, but also in hobbies both inside software development (such as the notorious Side Project™️ and diving deeper into back-end development and technologies) and outside software development such as fitness, music, reading, gaming, and trying to spend more time with extended family and friends as life would allow.

Trying to find that place isn’t so much a destination but a perpetual balancing act.

Now, I’m working for another company doing a lot of back-end work as well as things that fall under the freshly-minted-DevOps-label completely enjoying it. It’s still in the WordPress space but in a different way than it was two years ago, five years ago, and ten years ago.

And that’s more or less the point: Software and the communities and economies that grow around it are malleable or always changing. Things aren’t always going to be like they were, like they are, or are not going to reach some final destination where we all breathe a collective sigh of relief. Instead, we’re going to see some people decide to exit the community and do something else, we’re going to see new people come in and start new things, and some of us are going to continue operate within but in different capacities.

So why this overly wordy post on a look back-at and a look-into my current place in WordPress? Because we’re nearing the end of the year and I look forward to the next year there’s almost a gravitational pull to want to say I want to get to back to writing like I used to write. Or maybe I want to get back how things were a few years ago [in some form or fashion].

Truth is, I would like to get back to writing, but I have other demands on my time at this stage of my life. So what’s the balance? It’s probably something like writing more as time allows without sacrificing time with other responsibilities and dialing back on things that aren’t the best use of my time. (We all have those, right?)

Even more so, there are things I want to share about in terms of the work I’m doing and how it relates to WordPress. But it’s not going to look like these long-winded tutorials or pieces on how to achieve a certain thing because WordPress has changed. There are only so many ways to share how to do a thing until you’ve exhausted it and until the article is some dusty pile of papers sitting in the back of the room.

Again, though, software is always changing and the people and the economy are, too. So even though there was A Way To Do A Thing a few years ago, the Way To Do A Thing now might be different. Or there maybe something completely new and is deserving an article on How To Do This New Thing.

And that’s where I’m going to end this article.

So that’s the plan, but there’s caveats. And we’ll see how things go next year.