It’s been almost three years since I released the first version of Easier Excerpts. It remains one of my simplest plugins (with Scheduled Post Shortcut being the other); however, it’s one that I dogfood the most.

Now that WordPress 5.0 is out (and, at the time of this writing, WordPress 5.0.2), Gutenberg is out, as well. And with the new editor comes a new way to write excerpts.

So, before the holiday break, I pushed an update to Easier Excerpts that has support for both editors. 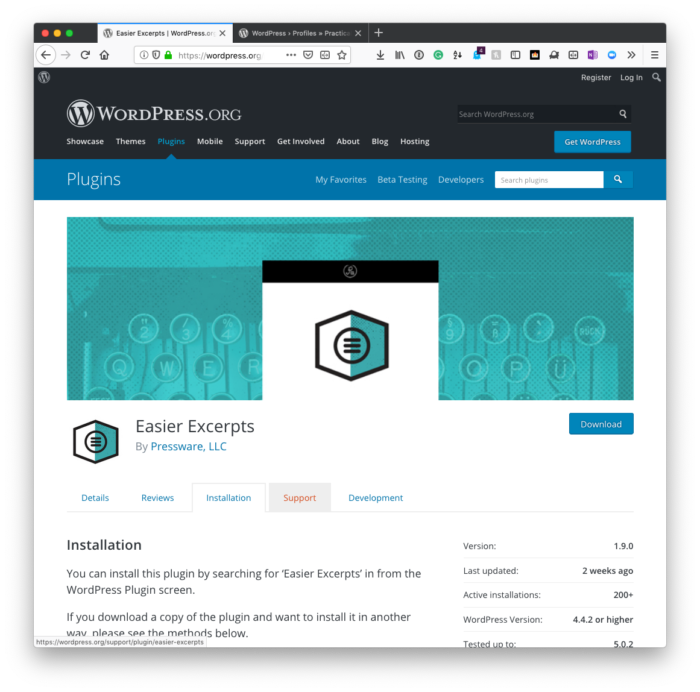 The two most notable things about this version of the plugin are:

And for those who are reading this who are developers, this was my first foray into supporting two editors in one plugin. Because the complexity of the plugin isn’t that hard to start with, updating it to work with both versions of the editor wasn’t difficult either.

That said, I still have this disclaimer in the plugin’s README:

Note this is not yet Gutenberg-compatible but will be soon!

And this is because the implementation can still stand to be refactored.

At this point, I dislike shipping things in a state of functionality with which I’m not happy, but I’m working to curtail that urge because it’s preventing me from actually shipping more things than I want.

The Full Set of Changes

Since my last update, I’m slowly working towards introducing a more modern approach to how the plugin is built, but I’m doing so incrementally.

Thus, if you look at the source code, you’ll notice a few new things as well as some residual “old things.” Eventually, that’s all going to go away.

Anyway, here’s a rundown of all the changes that have made their way into the plugin.

I’ve also removed support for excerpts in files, but that doesn’t mean that I won’t re-introduce them later. There simply doesn’t seem to be a demand for them right now.

That said, if you’ve not tried the plugin before, download it and see if it’s something that you like regardless of the editor that you use.