The Clean Architecture and WordPress

For the past couple of weeks, I (along with others in the comments) have been talking about things such as testing, namespaces, and more. When building well-architected, testable, and scalable software, these are all relevant topics.

But they only scratch the surface of some of the many ways in which we can manage project architecture.

Developers have been experimenting (and using) WordPress with a variety of different tooling such as different web servers (like IIS – good luck :) and with different database servers.

And when it comes to dealing with various types of third-party dependencies like database servers, creating a proper architecture is key to making sure your code is portable between environments and for other reasons, such as testing.

An article from 2012 from 8th Light talks a bit about what’s called The Clean Architecture. Though it’s a few years old, I found that many of the principles it outlines can be of use in the work we do as it relates to WordPress. 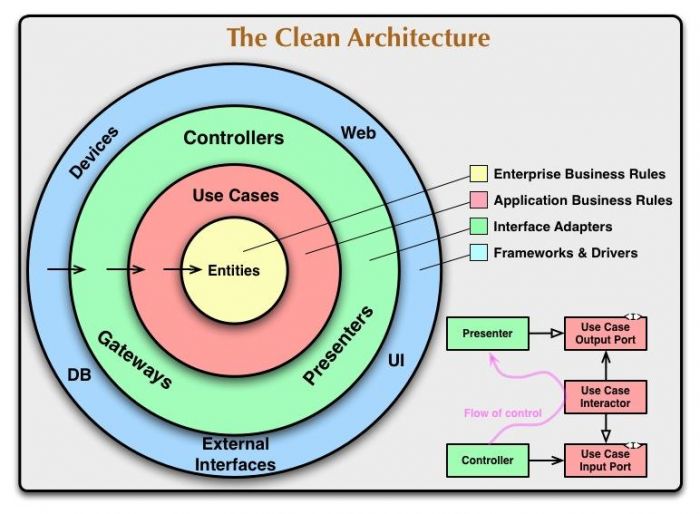 The rules of The Clean Architecture are straightforward and make sense when talking about writing code in a platform-agnostic manner.

And there are plenty of other things the article covers that are worth reading if for no other reason than to learn alternative ways to organize object-oriented software. Before talking about how this is applicable to WordPress, the article concludes with this statement:

By separating the software into layers, and conforming to The Dependency Rule, you will create a system that is intrinsically testable, with all the benefits that implies.

And this is about as succinct as a statement possible to represent the rules outlined above. Still, this raises the question as to how we might look at this in our work related to WordPress.

Applying This to WordPress

When I talk about these types of principles, I’m usually referring to the work that goes into creating plugins. Themes are completely different types of projects, and I tend to treat core as a foundational layer on which everything else lives.

With that said, here’s a short list as to how I think about the above principles when building WordPress-specific projects.

When working with WordPress, it’s common to think of frameworks as front-end related libraries for styling our user interface.

But there are a plethora of frameworks that aim to make working with certain things like the Settings API a bit easier. Though I’m not particularly a fan of them, they do exist, and other developers do use them.

When following The Clean Architecture, code should be written such that it does not depend on, or require, the use of a third-party library. Whether or not you use them doesn’t matter when architecting your plugin.

They should not need to be loaded in order to use or test your project. If they are absolutely necessary for a type of testing, then they should already be present on the system. But I’d argue this defeats the purpose of making sure your business logic and related logic are independent of the rest of the application.

Though this tends to be common in a variety of other testing methodologies, it rings true here as well. As the article states:

The business rules can be tested without the UI, Database, Web Server, or any other external element.

The primary takeaway that we should have is that the server-side code of our plugin should not require any type of templates, partials, or views to function.

Everything should be able to be executed by calls to classes and method calls. In production, the views or templates would trigger this very same logic.

Independent of the UI

In a plugin that includes a UI such as a settings page, front-end functionality, or both, the underlying code should be able to be adjusted so that it doesn’t break the UI.

This means that we’re able to interact with the system and drive it using automated tests or other external code without requiring a web browser or any type of visual element to trigger functionality.

If you do require this, then the direction of your dependencies is bidirectional, and you’re ultimately violating one of the primary principles of The Clean Architecture.

Independent of the Database

Though this isn’t something as common in WordPress since WordPress is effectively the layer that communicates with the database (and our code interacts with WordPress), it’s still worth mentioning that our code should not require the use of a particular database server.

For us, this usually stops at using the Options API or a Metadata API since that’s what WordPress provides as it relates to talking to the database.

Independent of Any External Agency

This sounds a bit fancier or complex than necessary. An “external agency” is anything that exists in “the outside world” or as a third-party library or component that may be part of the overall system.

In the world of WordPress, this may include other plugins that our plugin or project may run alongside. We shouldn’t be concerned with them (let alone conflict with them), nor should our project require them. At this in this particular architecture (there are strategies for dealing with this, but that’s another post).

In short, think of the project that follows this architecture is being self-contained being aware only of itself and various layers knowing only of dependencies facing in one direction.

There are plenty of other architectures that can be applied to WordPress projects and this is one of many. There are also a variety of tools or patterns that we can employ to help enforce this architecture.

Regardless, the purpose for sharing this, discussing it, and bringing it up is so that we can think more strategically about how we’re organizing the components of our work.

Sometimes, I think plugins are often that of as simple, small extensions that add functionality to WordPress. This is certainly one way in which they work.

But other plugins can be far more advanced and complicated. In those situations, it helps to have some rules and guiding principles to help us organize our work to make sure it remains scalable, testable, and won’t ultimately turn into a big ball of mud.