A Bit About Micro.blog (And Why I Backed It)

In a deviation from the typical type of content I write, I want to share a bit about Micro.blog in case others have yet to hear of it, why I backed it, and what I hope it aims to do for the web. 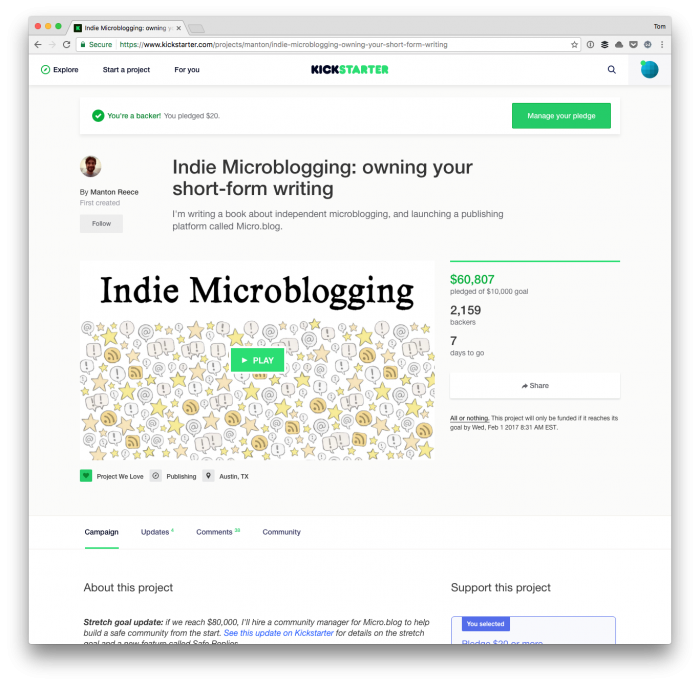 In short, the whole purpose of Micro.blog is to provide an easy place for people to both write and own their short form content.

From the Kickstarter page shown above:

Today, most writing instead goes into a small number of centralized social networking sites, where you can’t move your content, advertisements and fake news are everywhere, and if one of these sites fails, your content disappears from the internet. Too many sites have gone away and taken our posts and photos with them.

But there’s more to it than that. At the time of this writing, there’s a week to go in the Kickstarter, though it’s far surprised its goal, there are some things about the service I’m excited about and want to share.

First, because of my appreciate for writing and a strong desire for people to own their content, I wanted to back something like this.

I’ve talked to a few others about it and the immediate response I hear from those who know I do something with WordPress ask if I see it as a replacement for WorePress.

No, I don’t see it as a replacement for WordPress. It’s not a full-on blogging platform.

Instead, it’s something that – at the very least – compliments what WordPress does and, at the very most, helps to make sure whatever it is we are sharing online starts in a place that we own.

To be clear, yes, there is a hosted variation of Micro.blog so the content can be stored on the service on which Micro.blog runs, and that may sound as if it’s conflict with the purpose of the project.

But for those who are less technologically inclined, isn’t it easier – if the terms and conditions are right – to provide a turn-key solution?

With that said, one reason I backed Micro.blog is that I’m a fan of decentralization. I’d go as far as to say that when it comes to publishing content on the Internet, making sure that I have full access and ownership of the data that I share is important.

The thing about Micro.blog is that it supports cross-posting. So if there’s something I want to share on Twitter and I want to make sure that it starts off somewhere I have control over, I can post it to my Micro.blog account and cross-post it to Twitter. 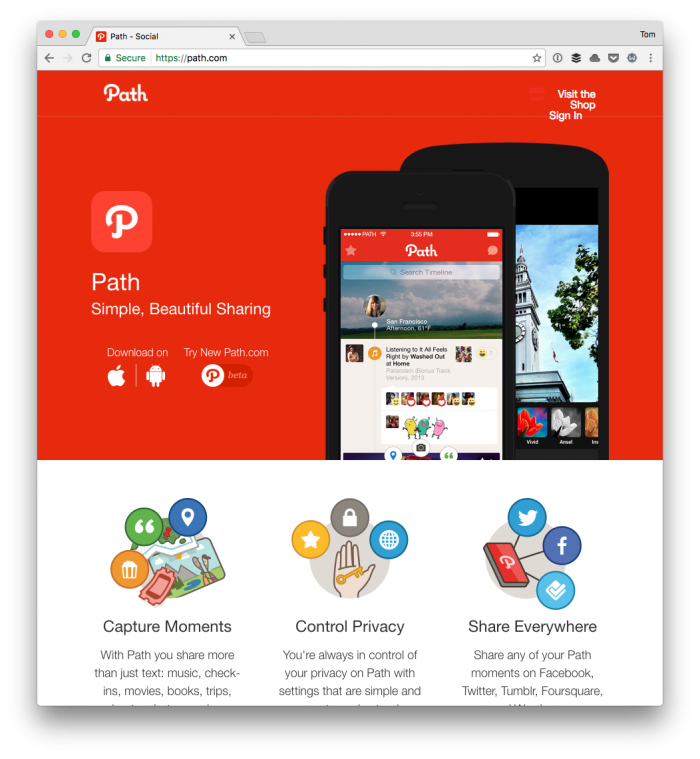 It reminds me a lot Path. And as much as I like Path (and yes, I still use it for my closest friends and family), there’s absolutely no way to get information out of it.

(So in a situation like this, just cross-post path to a self-hosted WordPress install, and you’ve got an archive. 🙂).

And, yes, I initially started off this year experimenting with Medium. I’ve since backed out the content and am preparing to publish it on a different WordPress site soon enough. But I digress.

You get the point, right? Content ownership and all of that.

One of the neat aspects of Micro.blog is that it’s using RSS to power some its features.

For whatever reason, when Google decided to kill off Reader, a lot of people stopped using RSS readers. It’s like RSS died with Reader which is silly because a far superior service, Feedly, exists. And I use it every day. 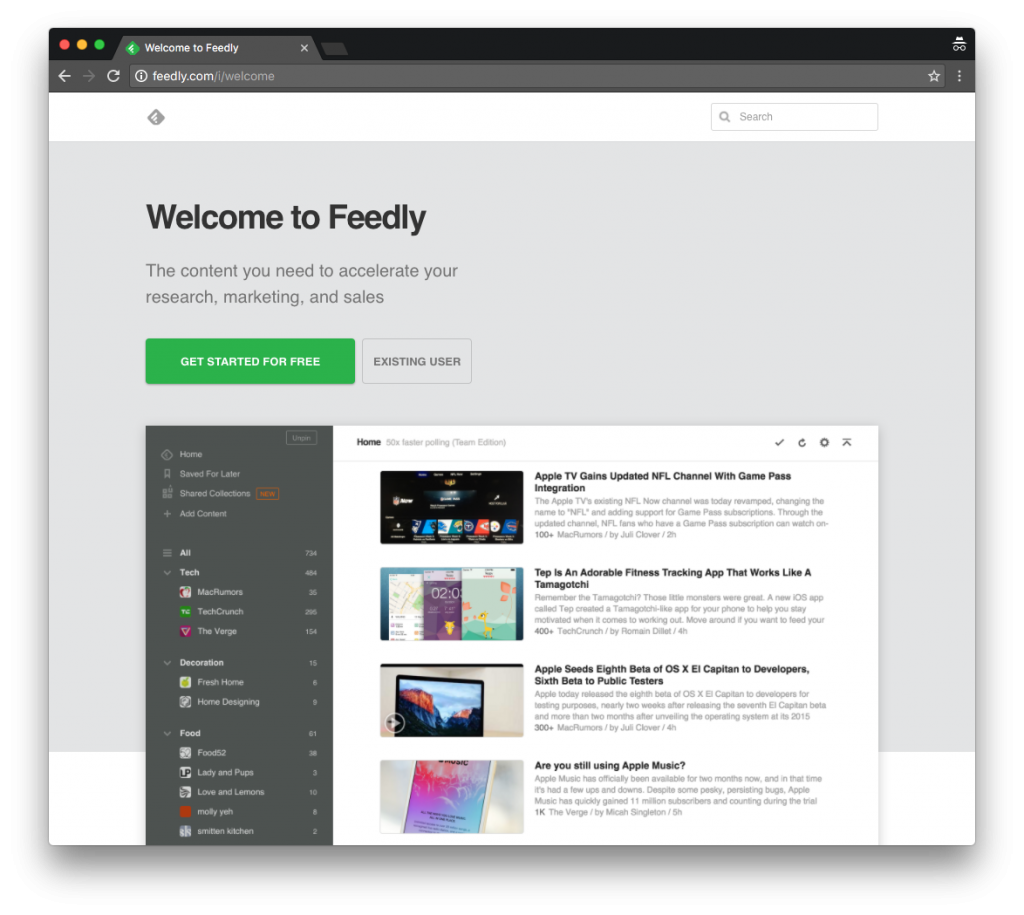 When it comes to reading others’ content, commenting, following, etc., all of its powered by RSS and that’s cool. Why try to set out and build something new when there’s a syndication protocol that’s solid, tried, and true on which you can already build?

And that’s a neat way – not a proprietary way – to implement relationships among those using the service.

RSS is dead; long live RSS (did I do that right?).

I’ve asked the author if Micro.blog will support any extensions. At the moment, no. The plan is to offer the service for publishing but allow others to create custom themes for the service. 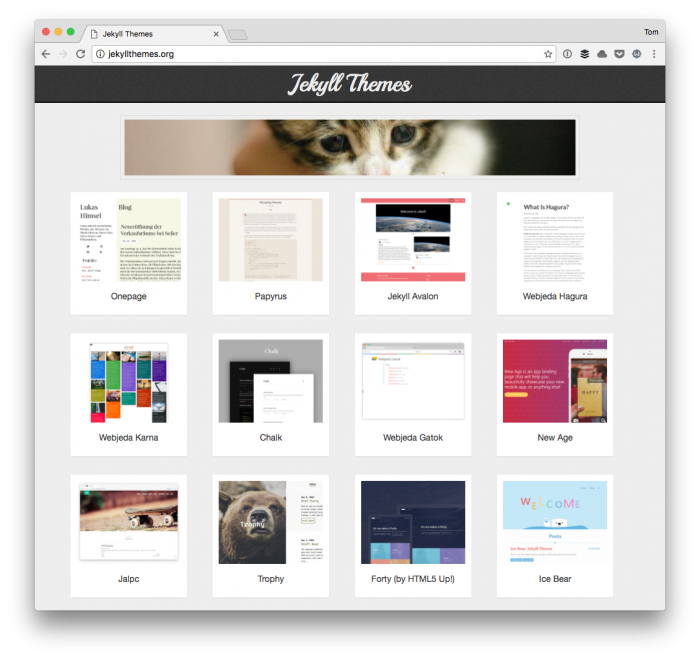 The themes can be designed and built to run on Jekyll (much like what’s here). And I’m a fan of that because I think if extensions, add-ons, plugins, or whatever you want to call them are made available too soon, at the wrong time, or ever, then the core purpose of the service can turn it into something it never set out to be.

And those are some of the primary reasons I’ve backed Micro.blog. I think that it’s a great idea and it’s something that’s useful for a lot of people who are in the same space as those who read this post.

But I also recognize there’s an uphill battle to fight (if you want to be aggressive about it) on convincing others to use it rather than to use something that already exists such as Twitter and Facebook.

I mean, we love our social media, right? That’s the thing, though: I don’t think Micro.blog is setting out to take on social media. Instead, I believe that it’s a place to give people the ability to simply self-publish and to cross-post to existing services.

For some of us, that’s awesome. For others, it doesn’t matter. And that’s fine! We can put our money where our values are and use that.

Regardless, if nothing else, I only want to share my reasons for backing Micro.blog and also to get the word out about it. Though it doesn’t necessarily need any more funding, it might be neat to see other people on the service once it is launched.

Not to create yet-another-social-network, of course, but to have a place to publish shorter form articles and thoughts that aren’t long enough for a WordPress-based site, but are still more personal or longer than a tweet.