To clarify, earlier this month I talked about how I’d made the switch to Atom as my IDE of choice. I’d also shared a package and a few steps necessary to get PHP CodeSniffer working with Atom. And though that’s nice, there’s something to be said for having other features available (more of which I’ll share in the future).

This isn’t to say that I think we should be using autocomplete as any crutch but if it comes down to having the various hooks and functions appear while typing versus opening up a Codex reference, I’d much prefer the former.

As the project page states:

Autocomplete support for WordPress actions and filters in the Atom editor.

And the nice thing is that it’s put together by Joe Hoyle, someone highly reputable and capable in the community. 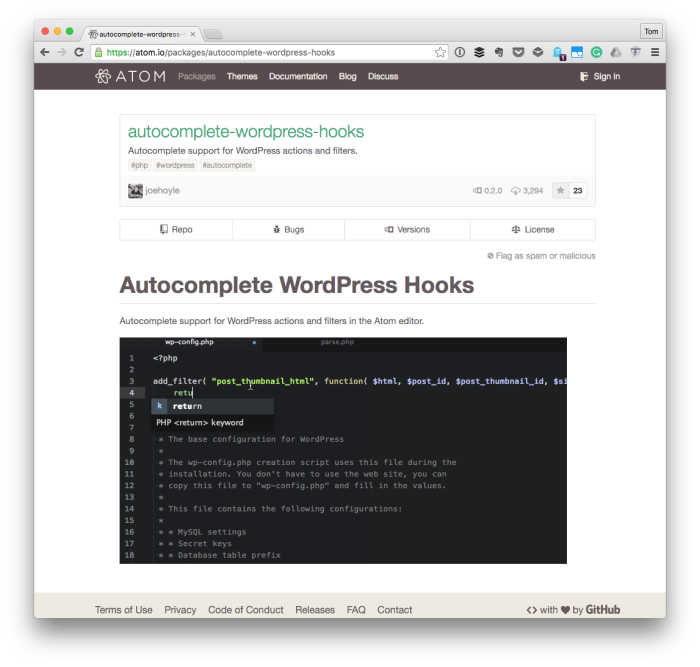 Personally, I’m a fan of having packages like this available not only for WordPress but a variety of languages. I know some see them as a way to shortcut truly learning an API, but when you have a large API, or you need to work with lesser known functions, it’s not to have this kind of stuff available.

Microsoft has had their IntelliSense available in Visual Studio for decades now. We’ve had Java autocomplete functionality in a variety of IDEs, and even Coda has a plugin for WordPress autocomplete.

As I said earlier in the post: This shouldn’t be used as a crutch, though. More as a tool for improving the efficiency with something you already know. On the flipside, perhaps you’ll stumble across a function you’ve not heard of before.

In that case, open the Codex or the WordPress source code and maybe you’ll learn something new.