WordPress Admin Notice Plugins (And Why Options Are Good)

A couple of days ago, someone shot me a link to Dobby (no the house-elf, but sorta – and it would’ve been just a bit cooler, right? :). In short, it’s one of the various WordPress admin notice plugins that I think is worth checking out. 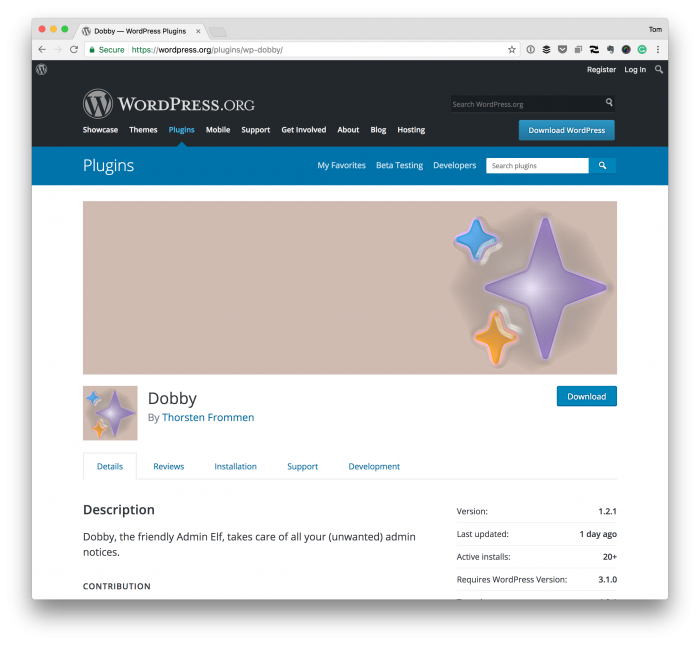 It’s written by Thorsten Frommen (who inspired this post, to be honest) and a developer for whom I have a lot of respect.

The plugin’s description is as follows:

Dobby, the friendly Admin Elf, takes care of all your (unwanted) admin notices.

The emphasis added is mine, but it sounds a little familiar, doesn’t it? The drama.

Maybe I’m wrong, but I think for many posts, this is the point where some may take the opportunity to critique one option, praise another, and try to praise their work.

It’s the whole competitive nature of what people do, right? I’m not saying it’s wrong. But I’m not that person and this not that type of post.

Instead, I’d rather take this opportunity to say why I think having similar plugins that do [nearly] the same thing are good for users and are good for developers (regardless of experience level).

First, having multiple choices for how to do the same thing is not new. Think about how many times you go to any store, and there are similar products all of which do the same thing but they are by different brands.

You can see this from, what, cars all the way down to something like mustard. So it seems only natural that it’ll happen in our field, as well.

When it comes to open source software, having multiple products that do the same thing is a great way to review separate code bases, to see how different programmers approach the same problem, and then to learn from that.

Sometimes, the way one programmer does something is going to be better than another. Sometimes it’s not. If nothing else, it’s a way to gain experience even without having to build something on your own.

Though I’m a fan of doing that, perhaps this is the next best option.

It’s Not About Which Is Better

As I mentioned at the top of the post, I’ve no plans to recommend one plugin over the other.

They both do similar things, Dobby is written by a developer who I respect and recommend following both on Twitter and both in his work.

I don’t think there’s a way to lose in this scenario.