All About Up and Running with WordPress

A few months ago, I had the opportunity to sit down and chat with Fred Meyer and David Hayes of WPShout to talk about a variety of things all related to WordPress development.

During our Google Hangout session, we talked about the following questions:

Ultimately, it was a great discussion. Fred and David are both really nice (and incredibly smart) guys who really made the conversation worthwhile. Perhaps the coolest thing about our time together, though, is that it’s part of a larger project on which they were working targeting those who want to really get up to speed with becoming a professional WordPress developer.

But it’s far more than just interviews with myself and other developers – and for those who are interested, I also have a discount that’s applicable to any of the packages that they offer.

Up and Running with WordPress 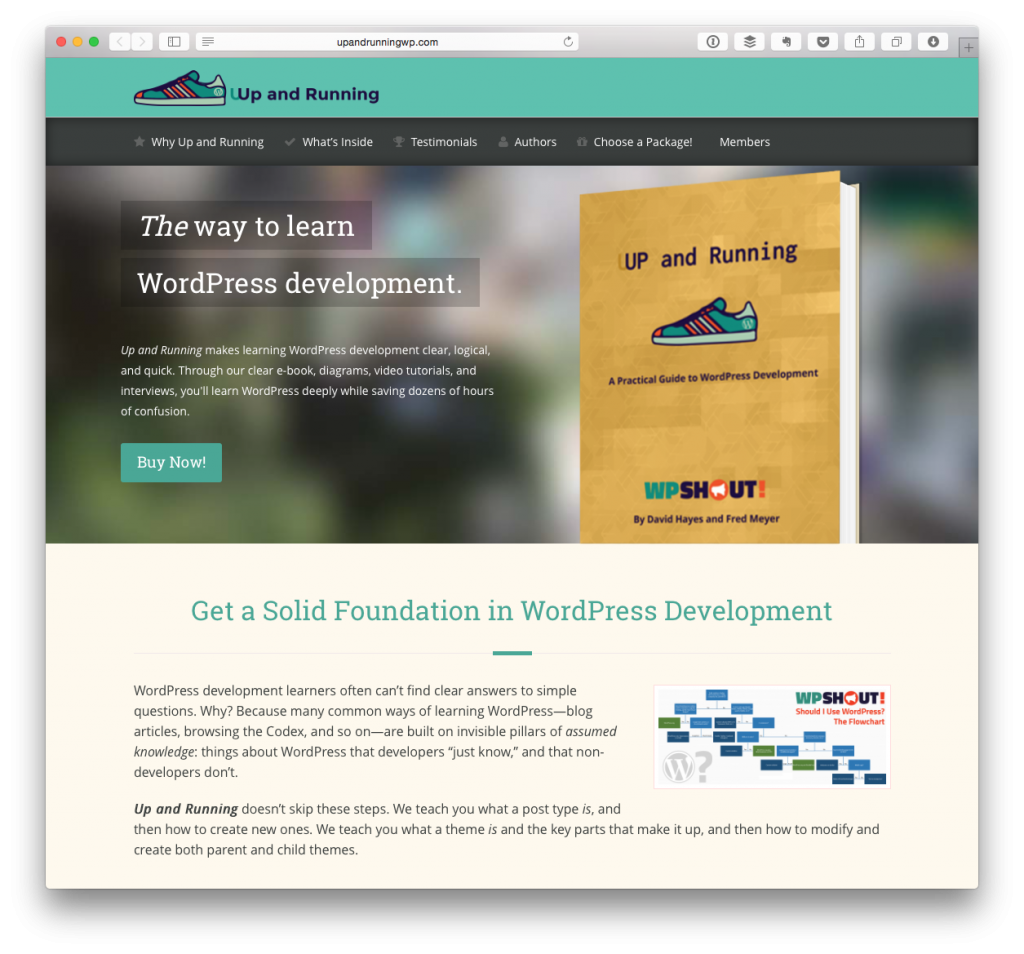 Straight from the website, Up and Running is specifically geared towards those who already have a foundation and really want to get into hardcore WordPress development (be it themes, plugins, or applications).

Up in Running is purpose-built to empower experienced WordPress users to begin developing their own WordPress solutions: themes, plugins, and full-fledged applications.

As an example, during our time together, one of the things that I discussed was how I tackled a problem of having to build a CSV parser and importer that imported records in batches and that used Ajax to provide the user instant feedback to the status of the importer.

In addition to discussing this, I also shared the code that I wrote as well as walked through much of it line-by-line discussing the reasoning behind the decisions that I made (and even some options for improving it).

Because of the nature of the client work that I do, I don’t often share projects and work that I do as I were building, say, theme products or plugin products like many shops do so this provided an opportunity for me to do something like that and do so within a context for learning.

Though I really enjoyed my time in participating in the interviews and contributing content to the course (and I was honored to be a part of it), I’m also humbled to be in such good company of other people who are far more accomplished than I am.

All of the above have contributed material to Up and Running each of whom offers their own take on the questions above. Additionally, they provide guidance on tough problems that they’ve tackled and their thought process behind it.

The reason that I think this is so valuable is because we all learn and work in different ways and having a wide variety of people with varying levels of experience and methodologies caters to all of our different learning styles.

As previously mentioned, there are three different packages available each of which offers different varieties of content. For those who are interested, you can use the code getupandrunning to get 15% any of the offers they have available.

This code will be active at least through the end of the year, so even if it’s not in your budget to grab a copy of the material now, you have some time to wait until it’s available.

Note that I don’t receive any commission or kickbacks or affiliate payouts for promoting Up and Running. I’m simply sharing this because I enjoyed participating, love what Fred and David have done, and think that it’s valuable material for anyone who’s interested in getting into WordPress development.