The other day, I was talking with a friend, Toby, about the lack of inactivity I have on GitHub. Specifically, I have a lot of private repositories, and I have a lot of secret gists. There’s a method to all of this that I follow, though:

But during the conversation, I came to the realization that I have a lot of small classes, plugins, utilities, functions, helpers, etc. related to WordPress development or JavaScript that I’ve never really put on GitHub. 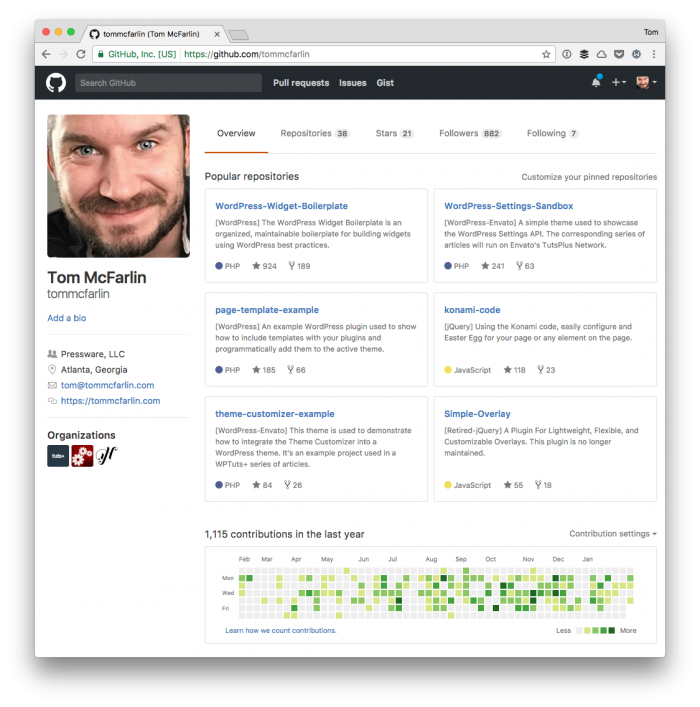 Much of what I currently have is out-of-date.

That is, I don’t really open-source my WordPress libraries. I have reasons for this all, but the bottom-line is that I want to change that.

First, I acknowledge that it’s a shame. I mean, I dig open-source for reasons of free software (for study, for forking, for education, use, and so on). But, if I’m honest, the burden that comes with maintaining a project that might become popular becomes a bit more to handle.

In fact, it can get overwhelming to a point where you just want to ignore whatever feedback you may get. I’m not a fan of that primarily for the sake of disrespect.

On the other hand, I could just mark the repository as private but who does that help? The project isn’t commissioned or anything so what’s the point in keeping it in lockdown?

As I’ve mentioned in numerous blog posts this year, one of the things I want to do is to make some changes to this blog. I see this as the hub of a lot of what I do, and so sharing various projects and things like that would make sense, right?

Sure, I’ve shared some projects over the years (and you can see them), but many of them are dated or unmaintained. I’ve considered nuking much of my account and starting over but have been given other advice.

Anyway, this isn’t to say that I’m sharing a given project today, but soon. Instead, it’s more about the overhead that comes with managing an open source project.

Wait, What? Share Your Work, But It’s Too Much Work?

So to that point, let me clarify: I’m absolutely in no way saying a simple WordPress plugin or other utility-type of a library is comparable to something like other large applications that we know.

I’m not delusional (most of the time).

But I’m also in a spot where I’m trying to run a business, build a marketplace specifically for plugins for bloggers, and work on client work all the while trying to share some things with the community of developers that often give so much.

Sure, we have those who are less than stellar, to put it politely, but in my experience, we have plenty of people who love to open issues, submit pull requests, and offer code critique.

And that can make a project that much better.

With all of that said, I’m going to try to do a better job of open sourcing some of the stuff I just have laying around. I don’t know if it’s useful. I don’t know if it’ll help anyone. But it’s been beneficial for me, and it’s things that I use that I wish existed but don’t, and that help me in my day-to-day.

So tentatively starting next week, I’ll be sharing some of this stuff.

Finally, I’ve left comments closed for a while, but I’m all for hearing feedback on this so feel free to leave a comment.