Our Critics and WordPress and The Silver Screen

As much as I love movies (and I’d venture to say that few people don’t), I rarely talk about them on this blog. I mean, there’s very little overlap between whatever it is we experience in the theater or via Netflix that crosses lines into what we, as those involved WordPress, do for a living.

Sure, I mean there are plenty of TV shows and movies that try to show some type of computing or programming angle – probably now more than ever – but it’s rarely worth mentioning unless you’re simply writing to make fun of it.

But good movies, you know, those that make you feel something or that connect with you on a level that doesn’t happen often can end up creating some type of connection between what you’ve seen on the screen and what you do for a living.

So for a moment, let’s pretend there’s some type of connection that can be made between our critics and WordPress and the movies that we watch.

I recently watched the movie Chef (which took me longer to watch than I had originally planned), and I absolutely loved it. 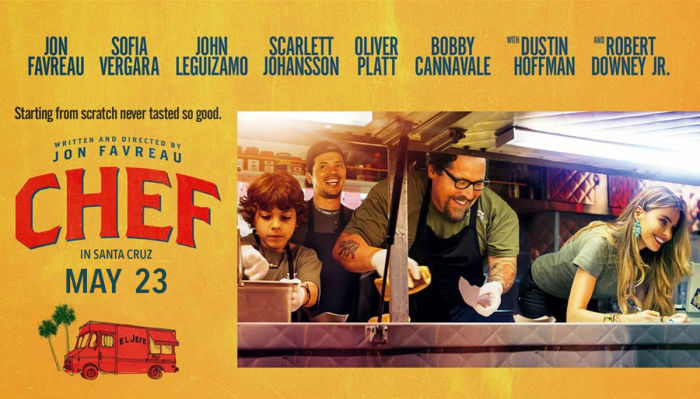 Spoiler Warning: If you haven’t it seen it and you want to avoid spoilers, then stop reading now. Anything past this point, though, and you’ve been warned.

Sure, there is a neat use of modern social networking in the movie like the use of tweets, vines, 1-second-everyday, and so on. That’s not what got me, though. I mean, that’s just part of our culture now.

Instead, there is one particular scene I couldn’t shake even days after watching it. And it’s not because it was related to blogging or to building software or anything like that in the very least. It wasn’t even something that was revolutionary.

It was just genuine.

It dealt with how we speak to one another, the effects our words can have on others, and how others can impact us.

I know, it sounds incredibly basic. Simple. Perhaps even juvenile. But hear me out.

Before I go any further, I want to make sure that I’m clear in that I’m not going emo in this post. nor am I trying to play the role of movie critic or anything like that.

Before I go any further, I need to share the scene that brought about this entire post. Unfortunately, I couldn’t find a version of it on YouTube that I felt was of the utmost quality so what you’re about to see is the best I could find.

Furthermore, if you’re sensitive to profanity or you’re in a professional setting, you may want to wear headphones or just want to skip it all together. But know that without seeing it, though, you’re going to be missing a bit of context.

We’ve been there, right? It’s really cathartic to watch Casper let the critic have it, but the scene’s really simple:

You can distil it to that, but come on: Anyone who’s ever experienced any type of negative criticism can identify with this scene.

And that’s part of what makes characters great. It’s when they are relatable. It’s when they’ve undergone something that we can all identify with and then come out the other side on top of it, changed, and/or better for it.

Though that may be true and even formulaic for a good story, I want to stop while I’m ahead and actually back up a bit specifically to the point where the critic has affected the chef so much so that he ends up simply saying:

It makes for a great scene and can weigh on you enough if it resonates with you and something you’ve done in your life.

What’s This Have to Do With WordPress?

One of the things that’s easy to witness in the WordPress economy is any of the following:

I’m not saying I’m above it, nor am I talking about any site, product, or person in particular, Instead, what I’m trying to say is that we’ve all been there. Either we’ve been the unhappy customer or we’ve been the developer trying to let a user or customer know how we feel in a public forum.

And we end up feeling like Casper, the chef, in the scene above whenever he’s talking to the critic who so negatively reviewed him.

It’s easy to watch and to laugh and to write it off as just a movie. But really? Doesn’t art mimic life sometimes? I mean aren’t things like this inspired by or born out of something real and tangible at some point in someone’s life?

Don’t Write This Off

So if you decide not to ignore this scene and you take the scene as something that’s meaningful to someone, perhaps even yourself, and you look at how the written word can affect a person and the work they do, then shouldn’t we consider the words we write in forums, in comments, on Twitter, and elsewhere?

I know, I know: This isn’t the first time I’ve written about this and it probably won’t be the last.

For what it’s worth, the cynical side of me – which is a pretty large part of my personality – says that it’s almost futile to write about it because people are going to end up saying and writing whatever it is that they want and they are going to defend their words justifying it in whatever way works rather than aiming for some type of self-edification.

But that’s not for me to handle. I’m responsible for myself and how I handle my own situations.

“I touch people’s lives with what I do.”

So how does it all end up? There’s another great quote near the end of the movie where Casper is talking to his son who is about to serve a subpar product to a customer.

In the scene, he says the following:

I may not do everything great in my life, but I’m good at this. I manage to touch people’s lives with what I do and I want to share this with you.

If you’re a developer or someone running a business then I’d venture to say that you’re nodding your head along in agreement.

If you’re someone who runs a website that’s powered by WordPress, then I imagine you’re nodding your head along in agreement.

And that’s the crux of the matter: We’re all passionate about what it is that we’re doing it’s just that our target markets are different.

But at the end of the day, all are aiming to affect other people with their source code or their words. The intent is rarely to hurt another person (though there are those people out there, but I digress and they are irrelevant).

Ultimately, my point is that whenever something gets emotional – be it a comment that you want to leave, the feedback you want to offer, or the response that you’re going to send – consider the possibility that the person to whom you’re talking to isn’t out for malicious reasons.

They, as much as you, want to create and push the best result forward but need help in doing that in whatever format that may come. To that end, why bother directing something at them that you know will hurt?

Instead, aim for something constructive. At least believe the best rather than assume the worst. Is anything else really worth it?