Recently, Chris Lema published a blog post titled Have You Run Out of Blog Post Ideas? And if you haven’t read it, then I highly recommend it. (In fact, if you’re involved in WordPress, I highly recommend you subscribe to his blog.) 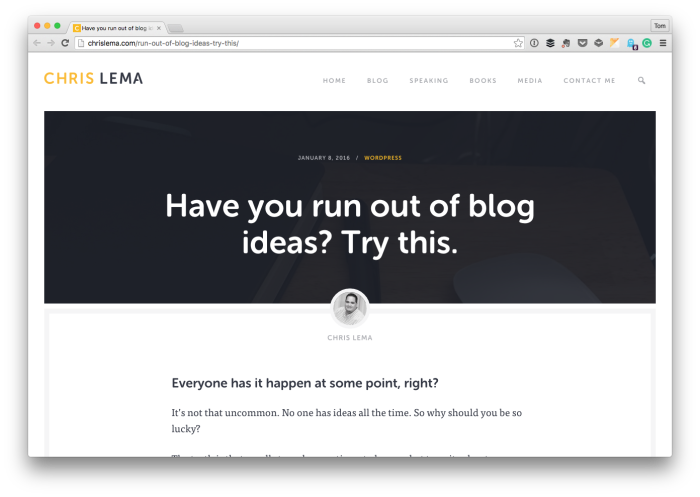 In the post, he shares some practical tips for how he comes up with ideas for blog posts. If you’re someone who’s looking to blog more regularly but aren’t sure how to do it, then the post gives you some great advice for how to help capture ideas and turn them into posts.

Since I try to blog daily and I try to make sure what I have to say isn’t something that’s meant to fill some type of weekly quota, I thought I’d follow suit and share how I go about coming up with ideas for posts and then turning them into actual posts.

Generally speaking, I’m assuming that anyone who reads this post is someone who’s already got a blog set up, is someone that blogs with some type of regularity, and is someone who is looking to take it a step further with blog post ideas.

One of the things that other writers often get hung up on is how to actually find ideas about which to write. There are all kinds of excuses for why certain things haven’t been published, but this post isn’t bent on refuting those excuses.

Whatever it is you have to write about is going to be unique because it’s contextualized within your own experience. In short:

With that said, how do we go about finding inspiration? Personally, I aim to use something I’ve experienced. This could be anything from…

And that’s the most general advice I can give as it relates to generating ideas: Draw on inspiration from things that you’ve done and that you do often.

But how is it possible to quickly capture ideas and then turn them into several hundred word posts?

2. A Few Words on Length

Posts don’t have to be that long. Truth is, many of my posts are often longer than I’d like and this is something that I’m looking to tweak over the course of this year (though you wouldn’t know it from this particular post, would you?).

How many words should I aim for when writing a blog post?

And unless it’s for a professional site that has a quota, I generally say, “however many you want.”

I don’t know how long it will take you to set up the idea, communicate the idea, and then ask readers to go a step further.

Whatever the case, don’t get caught up in your head about it. Share whatever it is you have to share in the way you want to share it best and go with that.

You’ll get better over time.

I don’t set out looking for ideas for blog posts. That is, I don’t sit down to watch a movie or sit to listen to music and think “How can I turn this into a blog post?”

Ideas for posts usually come after the fact whenever I’m working on something else and an idea crosses my mind as to how what I’ve seen (or, more generally, experienced) is related to what I write about.

There’s an implied point here, though:

Because I generally work with WordPress day in and day out and because I tend to write about the things that I do or have done, it’s almost always sitting on my mind in some way.

Honestly, I dunno if that’s good or bad, but I digress on that for now. Regardless I’ll often end up making some type of connection between something I’ve done to what I do each day. That normally fuels enough inspiration for a post.

You know that bit above where I talk about posts getting too long? This is where a post starts to do exactly that.

In order to keep this thing from going on for too long, I’m going to split it into two parts and cover various tools that I recommend in a follow-up post. For those who are curious, I will say that I don’t necessarily think tools are going to help generate inspiration. I think they help with organizing ideas and information, but that’s it.

For now, I’m curious as to what you do to find inspiration for your posts, though. I’ve shared how I do it (and linked to how others do it).

But what about you?