CLI: A Cheatsheet For The Command-Line

The CLI is one of those tools that I think every developer should know how to use even if they don’t use it consistently. After all, we have plenty of applications for taking care of tasks, right?

The thing is, from time-to-time, it’s useful. During the process of working on projects, you may be hopping back and forth between an IDE, an SSH session, S/FTP, a task runner, debugging, and so on.

Sometimes, particularly in the beginning, it’s hard to juggle all of the commands in your head.

Though I love using applications to help take care of certain tasks, I’ve never fully let the command-line go. Sometimes, it’s just faster to type out a string of commands and let them do their work rather than poke around a number of different applications.

Maybe that’s stubborn. I don’t know. But what if you’ve not used the CLI? How do you maintain a quick reference to the available commands?

CLI: A Cheatsheet By WebDevStudios

The CLI website has a couple of useful resources available right from the homepage. Specifically, you can check out:

Both of these are good resources. If you’re an experienced developer, then the wiki is an especially useful resource as it will provide you with what you need to do to build your commands in PHP.

But back to the question asked at the beginning of the article:

But what if you’ve not used the CLI? How do you maintain a quick reference to the available commands?

Though the website offers an authoritative resource, I’ve also found that WebDevStudios‘ cheatsheet to be valuable. You can check it out here. 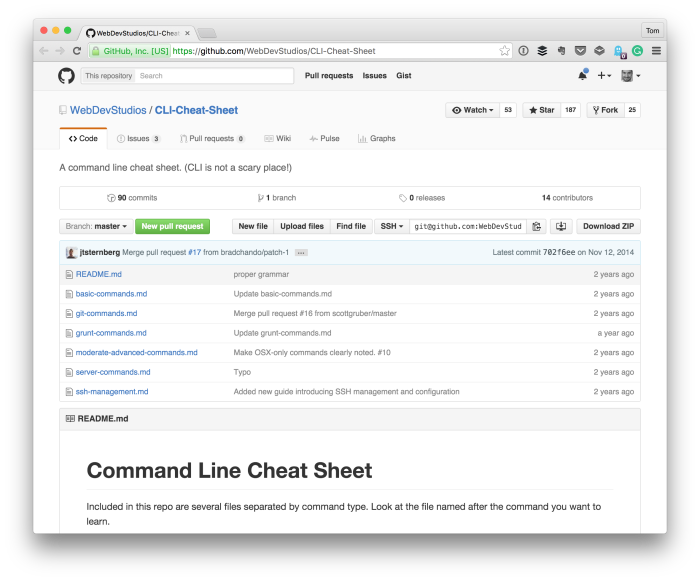 Included in this repo are several files separated by command type. Look at the file named after the command you want to learn.

In the repository, you can find a collection of commands covering things like:

Generally speaking, this is a worthwhile resource to star or to have on hand if you’re doing a lot of work (or even just some work) with the command-line as it will save you time when taking care of whatever task you’re working.

If you’ve got other resources for learning CLI, feel free to link them up in the comments for others to learn.