My Experience with a Standing Desk

Standing desks have been relatively commonplace for a few years now. I would say that it seems to be more prevalent in technology than anywhere else.

But I know better. I’ve read other more general blogs talk about them, as well. So, you know, technologists aren’t that unique after all. Who would’ve thought?

Generally speaking, they seem to be common for anyone who tend to work in a more sedentary environment.

There are plenty of articles all over the Internet about their advantages, but there are also articles that talk about how standing desks can do more harm than good.

What else would you expect, though? I’ve been using a standing desk for a little while now, and I thought I’d share my thoughts thus far.

My Standing Desk: The Story So Far

A few months ago, my family and I moved (not far from where we originally were). The move gave me the opportunity to think through how I wanted my office organized since I’ve been working out of my home more than anywhere else at this point in my career.

And for the record, I love that.

Anyway, one of the things I knew that I wanted in my office was a standing desk. My goal wasn’t to stand all the time, but to have the choice to do so. Honestly, some days I do spend the majority of the day standing, other days I’m at my desk.

Sometimes it depends on the nature of the work I need to do (do I need a larger screen?), or it depends on how I physically feel (sitting up with a sick toddler all night doesn’t keep motivation high :)). 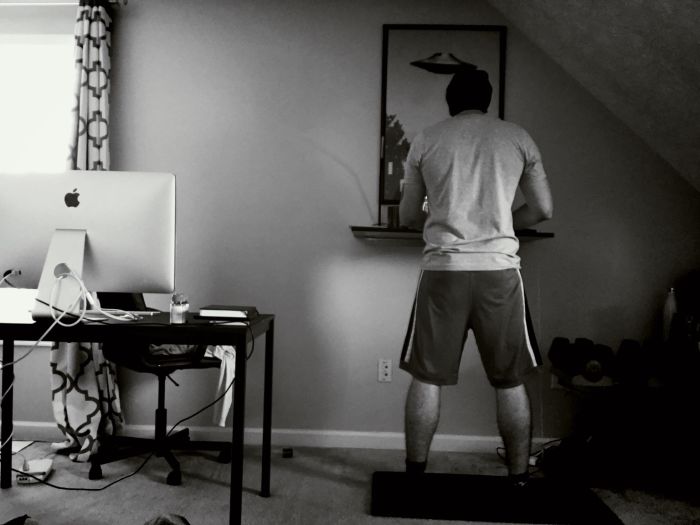 Yes, I till have – and recommend – a standard desk.

At the end of last year, I received the following:

I don’t know if you’d consider the previous an IKEA hack or not. All I know is that I like the way it looked, I like the ability to fold it down if needed, and its simplicity appealed to me much more than many of the actual standing desks that I’d found.

I started using it the day we installed it, and I’ve used it almost every single day ever since. As I mentioned, some days I’ll use it for the majority of the work day. Other days, I’ll use it for shorter periods of time or not at all.

Better, Worse, Or About The Same?

I can say that placing it at the right height (relative to my own) has been key, and I think having a mat below it is important, too. I say this because there are times where I’ve been working downstairs and I use our bar like a standing desk and standing in the kitchen without something under my feet gets tiring.

But who’s supposed to be doing this kind of work in a kitchen, anyway?

In addition to using a mat, another piece of advice I’d give is that the desk should not be used as a crutch to lean on for rest. Instead, it’s better to maintain good posture and rest your arms on the desk when working. Any other form has you defeating the purpose.

Personally, I find that…

I’m not out to evangelize it nor am I trying to create any converts, but I know that this is something that people often wonder about (I mean, I did myself). So I thought I’d share my experience with mine for anyone who’s curious.