Advertisements are one of those things that I’ve always been careful about introducing because I don’t want them to clutter the content or feel too, you know, intrusive as it relates to reading this blog.

To that end, I’ve generally kept them pretty minimal in terms of what’s allowed to display on this site.

People get their content in so many different ways now (email, Twitter, etc.), and the landscape seemed to have changed for some once Google killed Reader. Then again, some of us still use a reader (what’s up, Feedly? :) for the majority of our content.

For those who read this site in your browser, you’ve no doubt noticed the advertisements in the sidebar. As stated, they’re minimal by design:

This is because so many advertisements on the web are obnoxious. At the same time, running a site and promoting content from other companies and individuals within the WordPress economy is something I want to do.

It also helps the site to be self-sufficient in that it covers the costs of what’s needed to run the site, so that’s something I greatly appreciate.

As of today, I’m adding a similar setting for advertisements via Postmatic to display in the footer of my emails.

In December 2014, I started using Postmatic to handle comments on this blog, and I’ve been with them ever since. 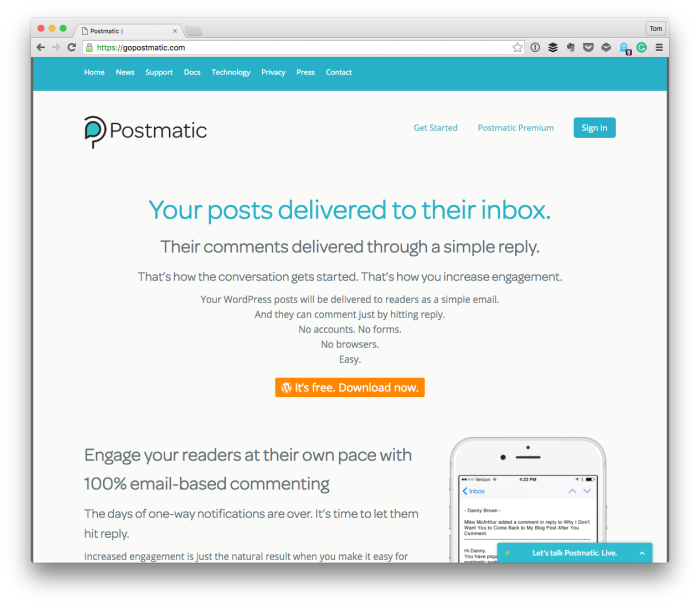 I’ve also cataloged by experience in some posts:

In short, I’ve been a fan since they first got started, and I’m a fan of what they’ve been doing thus far. And one of the new features they’re rolling out is support for RSS advertisements via BuySellAds.

Starting today, I’m going to begin offering advertisements via Postmatic that will display in the footer of my email templates. I’ve done something similar on one-off posts in the past, and it’s gone well. Anyway, these advertisements will follow the same rule as all of the other advertisements on this blog, and they are aiming towards the same type of audience.

Furthermore, they will be unobtrusive in that they’ll appear in the footer of the post. The goal is to help spread the word about other products, services, and people in our community as well as to continue covering costs of running this site on a daily basis.

So if you’re interested, you can check out the inventory on my BSA page. The visitation statistics differ from what Jetpack or Google Analytics show so if you’d like that information, I have it available, too.

Note: If you’re seeing this message (yes, this one :), then it means that BuySellAds is still processing the inventory for the advertisement space. If you’re interested, please contact me; otherwise, the inventory should appear soon.

A Word of Gratitude

Finally, for those who support this site via social shares, advertisements (both regularly and irregular), and by whatever other means, I sincerely appreciate it.

Blogging is fun and sharing information as it relates to WordPress, be it about something happening within the economy, my opinion, or some educational article on how to achieve something programmatically is something I love doing. To that end, thanks to all who help support the site. I appreciate it!