WordPress 4.4 was released last week and there’s no reason for me to cover all the information about it. You can read all about it on:

As with any WordPress upgrade, there’s often the following commentary:

I’m likely preaching to the choir with this post given the audience (at least of which I’m aware), but in case anyone reads this is not a WordPress developer and is someone who is tech-savvy and tries to say on the up-and-up with WordPress, then perhaps it’ll be useful.

If nothing else, I can reference this for others with whom I work as a means to explain something without doing so over and over again (and hopefully in a much clearer way).

Just because you upgrade WordPress and your site breaks does not mean that the WordPress upgrade broke your site.

This sounds a bit like circular reasoning, doesn’t it? Bear with me.

At the highest level possible, you can think of a WordPress site as the combination of three components:

And each of these work in tandem to power your website. You can picture it something like this: 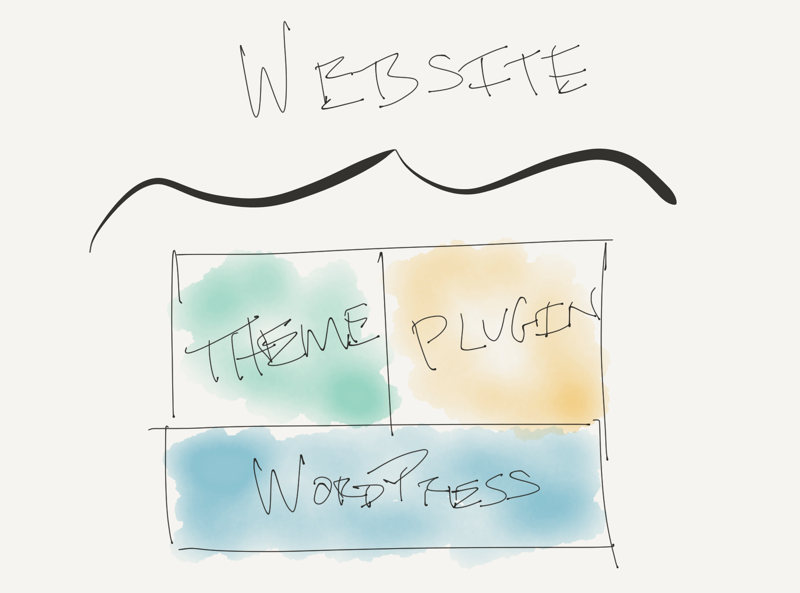 How to conceptualize a WordPress site.

And now matter how simple or complex your site is, these three things do exist. For example, if you’re running WordPress out-of-the-box, then you likely have the default theme and a plugin such as Akismet.

If, on the other hand, you have something more complex, then you likely have a more involved theme with a handful of plugins each of which are extending functionality of your site that’s not available outside of the box.

With that in mind:

To answer that, it’s worth taking a look at how it all fits together.

Remember themes are part of your website that give it its presentation – the look and feel. It’s like the make up and clothes sitting over your content to make it look good to your users.

You can stick with what you’ve always had, you can introduce something new, or you can go on and change it to something completely different.

But where you get your themes matter and whether or not they are compatible with the latest version of WordPress matters. If you use a theme from a source that’s not reputable, and/or if you use a theme that has not been updated in sometime, you are running the risk of compromising how your site functions.

It’s not because WordPress broke your site, it’s because the theme doesn’t work well with the current version of WordPress. The blame then lies not with WordPress, but with the theme.

As themes give a look and feel to your site, plugins extend functionality such that you’re able to do something with your site you’re not able to do out of the box with a standard WordPress installation.

Working with a variety of plugins can be a great experience or it can be an exercise in frustration.

If the plugins follow the WordPress Coding Standards and don’t do anything that’s outside the scope of what a plugin should do (in terms of interacting with the database in odd ways or not doing proper checks for certain constants, functions, class names or variables), then it should be fine.

Unfortunately, this is not the case.

There are plugin developers who build their work in what they conceptualize as a “closed-system” though I doubt that’s how they’d describe it. That is, if their plugin works on its own in a basic installation of WordPress, then it’s good to go.

Just as with themes, it’s not WordPress that broke your site, it’s the lack of development on behalf of the plugin authors.

For those who are building themes and/or plugins, how do we know we should be making sure our projects work with the latest version of WordPress?

Aside from following certain blogs, we also get automated emails when a WordPress upgrade is coming: 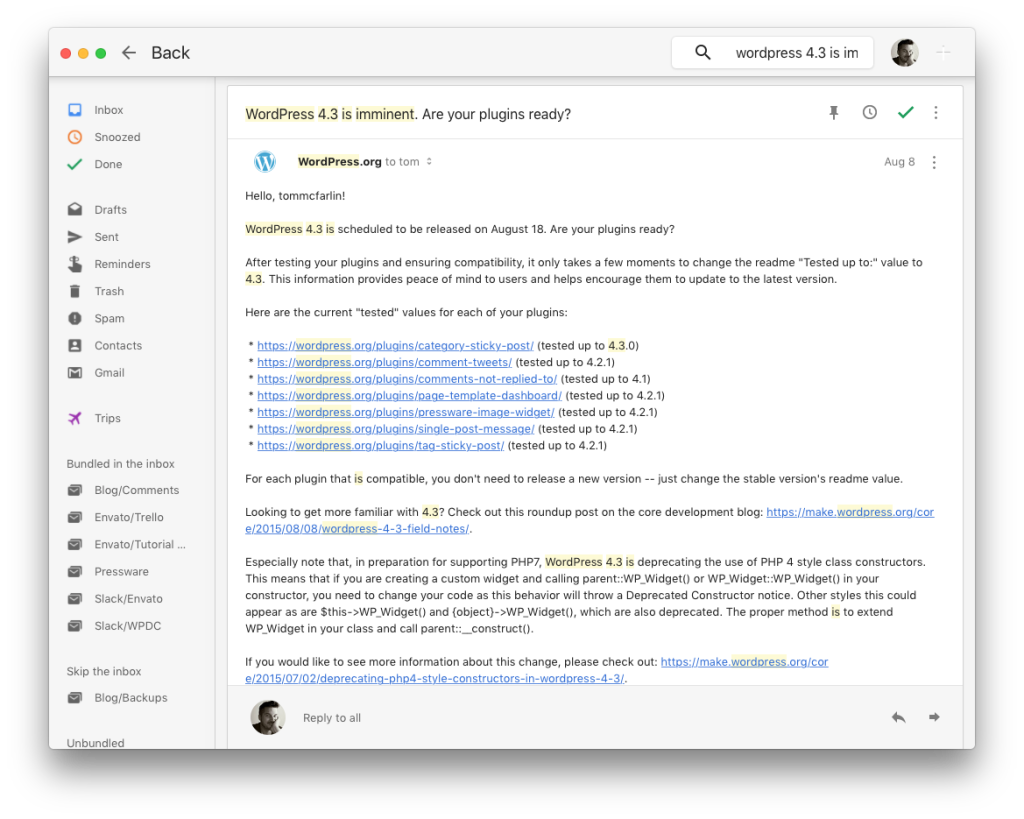 And that’s our cue to begin testing our plugins and preparing them for the next release of WordPress.

And you know what? I’ll be one of the first to admit that I don’t always have my plugins updated on time but I will say that I make sure, from the outset, that my plugins are following the standards as best as possible. Further, I answer every single email that comes in regarding my plugins.

I always try to keep my plugins as compatible as possible, but there are times where other priorities are in the lead.

The odds of it being WordPress is actually pretty low. This doesn’t mean it’s never the cause, but I’d make the case it’s far more likely it’s a theme, a plugin, a set of plugins, or a combination of them working with each other that doesn’t work well with the core software.

And when that’s the situation, then it’s usually going to be at least one of the things – the theme, one of the plugins, or multiple plugins.

The next time you upgrade WordPress, remember to review your theme and your plugins. Change to the default theme, disable the plugins, and then enable them one by one until to see if something isn’t performing correctly.

As soon as something breaks, you’ve likely found the culprit.

Sure, it’s time consuming and sure it’s tedious. But this is your place on the web. It deserves a bit of attention and care. The upgrade process is about as simple as it could possibly be, right?

Why not spend a little bit of time that we’ve saved with those upgrades making sure the things that are tailored to our site continue to do so rather than jumping to a hasty conclusion?