I know that there are different ways that people approach building WordPress themes and I’m not one to argue that there’s a single right way to do it. Sure, some ways are better than others, but that’s true of a lot of things.

Personally, I approach building themes, plugins, and so on as I would as if I was building some type of software. That has to do with my background. Similarly, someone who has a background in design and in front-end development will conceptualize what they are building in a different way.

Like I said, all of that’s fine (in fact, I think it’d be interested to see how different people view building themes, but I digress), but I do know that one common thing we always have to think about as it relates to updated our WordPress themes is the actual front-end design.

Specifically, does it make sense to completely change the design of a theme for a different version of the theme?

Generally speaking, themes should be for presentation, plugins should be for functionality. Yes, there’s a little bit of bleed over (and that’s really the topic for another post), but the short of it is that themes provide the look and feel for a site

For those who purchase themes – regardless of if its for their blog, business website, personal landing page, and so on – the process may generally go through something like this:

No, not everyone goes looking for themes the same way, but for the average buyer do not underestimate the role that the look and feel of the theme plays in making a decision.

After all, the look and feel is the theme. It’s not the code, the comments, the architecture, none of that. It’s often just how good it looks.

Now, let’s say you’re a theme developer and you’re someone who is working on a theme or a set of themes and you’re looking to begin to plan for the next major version of your theme – for some, this may be a major version bump like 2.0; for others, no so much. 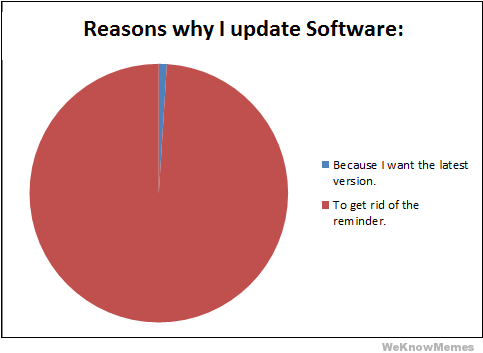 It all depends on how you version your work and, in this post, that doesn’t matter. Simply put, redesigns of projects tend to happen during major version releases (whatever your version scheme may be).

So let’s say you’ve got a theme called Acme and you’ve had pretty good success with it regardless of the type of theme that it is and you’re preparing to do a redesign for the next major release.

Personally, I don’t think that’s a good move – not when it comes to themes.

In other words, the theme is no longer the theme that was originally purchased.

Instead, you’ve got a different looking theme that has the same name as a previous theme. To customers, that’s a big difference.

So when others ask if me – or if I’m pulled in a direction of wanting to implement a redesign – if I think that a redesign of a given theme makes sense, I tend to say no. A theme redesign kills the original theme.

Instead, what I’d rather see happen is the original theme continue to be support and maintained with upgrades to fit with new versions of WordPress and/or whatever new additions browsers eventually have, and then to see new themes created from said design.

If your initial theme becomes dated, that’s okay. Only offer support for, say, a year and then retire it. There’s no reason you can’t support an existing theme for the customers, nor is there a reason why you can’t offer them a discount on a new version of a theme.

Whatever we opt to do from a business standpoint is exactly that – our business – but when it comes to actually redesigning themes calling them Acme 2.0, we need to stop.

To the users, it’s not the case. Instead, we’re essentially giving them a different theme with the same name.