Yet Another WordPress Business

If you follow the WordPress economy via your RSS reader, favorite podcast application, and Twitter, then there’s a chance you develop a level of cynicism around the idea of another WordPress business starting up.

By that, I mean that it seems like there’s something new every single week: It could be a plugin, a new service, a new site, a new theme, or whatever. And there is!

I know that some like to talk all about the low barrier to entry that WordPress offers (which I call into question), and you may say that because of that, it gives people this sense of confidence that they can start a business built around WordPress and then find success.

First, all of these things that we see so frequently are signs of a vibrant and healthy economy. Secondly, what’s wrong with so many people trying to start something new?

Being completely honest, I love seeing the various things that people are building. I, like everyone else, know that some things are going to be more successful than others. That’s the nature of it, right? The market decides what it wants and all that jazz.

One of the things, though, that’s a bummer is when I see someone start something new and then they completely abandon it to move onto something else. The project just sits and rots.

And for some, that’s fine. Maybe it should die a slow death in a dark corner of the Internet. But what about those ideas that are good, that do solve a problem, and that really can make a difference in the lives of people using WordPress?

Do we, as a community, have a habit of abandoning our projects too soon?

“What Are Your Drawing, Lily?”

I recently read an article via Nathan Kontny, CEO of Highrise and one of my favorite bloggers from Basecamp, called What are You Drawing, Lily? and it tackles this idea. 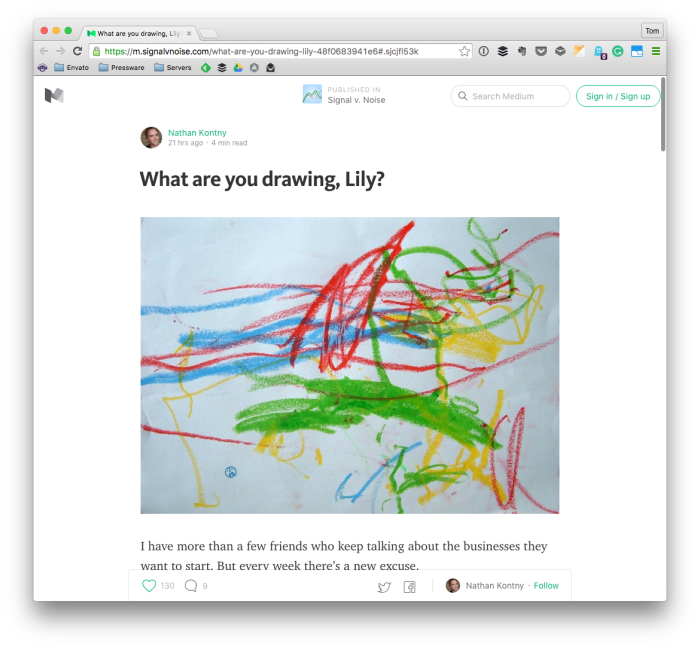 What Are You Drawing, Lily?

You can read the article for yourself, but one of my favorite passages is:

And he was right. Airbnb’s idea wasn’t just crazy, it wasn’t good — they wanted people to rent out real airbeds, and hosts were required to make breakfast for their guests. After 8 months in business, they were stuck making $200 a week in revenue.

Most of us would have been “smart” enough to give up. But instead they kept on sucking.

There are many more good points made in the article, but the point that I’m trying to make (through the help of this particular quote) is this:

It’s easy to look at all of the work other people have done (or are doing) around us and think that we’re doing something wrong because we haven’t “made it” (however you define that is up to you). But building something and then abandoning it a few months later isn’t fair to the product or yourself.

Give your idea a chance.

Sure, eventually the market is going to decide if they need it or not, but don’t let the fact that something you’ve worked on for a month or so die just because you’re not making any revenue off of it for the first few months (or even year!).

If you really love the platform, and you’re completely into the idea of what you’re creating, doesn’t it deserve all the energy and work you can muster to make it the absolute best you can?