Version Control With Git: A Guide From Tower

When it comes to version control with Git, it’s no secret that I’m a fan of Tower. In the WordPress development community, it’s not at all uncommon to hear others talk about why they love or hate GitHub, GitLab, Bitbucket, Subversion, or whatever source control system they are opting to use.

That said, I think it’s fair to say that learning Git has its advantages. Although WordPress uses Subversion for core, themes, and plugins, many developers (myself included) opt to use GitHub for some our projects. This doesn’t mean that learning Subversion should be optional, but I think learning how to use both is important.

For this post, though, I’m talking specifically about Git. Case in point: If you’re looking to contribute to some of the most popular plugins (such as Easy Digital Downloads) then you’ve nothing to lose with this.

So what’s a good resource for doing just that?

The web is replete with resources for how to learn Git (including the Git site itself.) But Tower recently released a book online (as well as other versions available for purchase) that are worth checking out. 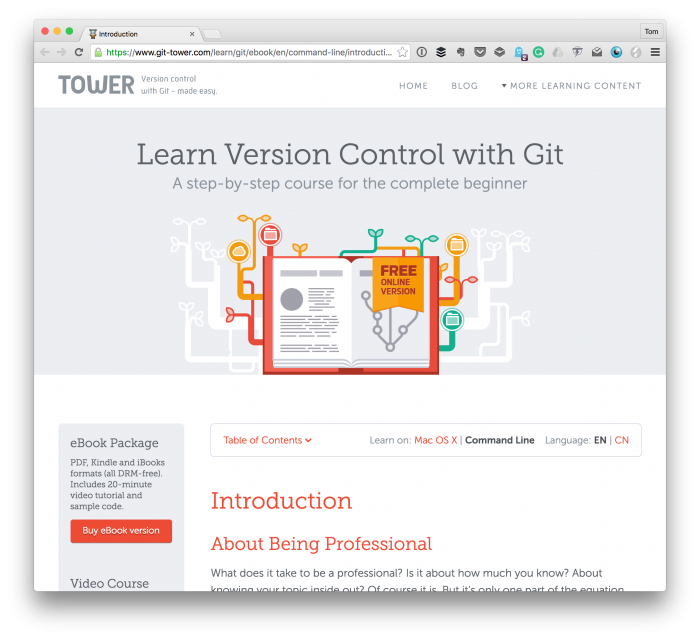 One of the things that I love about the site is exactly what it mentions in the introduction:

What does it take to be a professional? Is it about how much you know? About knowing your topic inside out? Of course, it is. But it’s only one part of the equation. The other part is about using the right tools and cultivating the right habits.

Specifically, I like the fact that they acknowledge part of becoming a professional in the industry is knowing what tools are available and knowing how to use them.

The thing is, finding a good place to start along with a resource that will take you through a system end-to-end can be difficult. This particular site has been one of the best I’ve found as it relates to teaching the Git source control system.

It’s Not Just About Git

If you’re someone who’s interested in getting deeper into this particular aspect of development, but aren’t sure where to start or aren’t even sure how to start learning, then I recommend reading through this book.

Even if you have some experience with Git, then it wouldn’t hurt to read through this to gain an even deeper understanding. Personally, I’m by no means an expert on the source control system (but I’d like to be).

So I’m recommending this not only for your benefit but my own, as well.