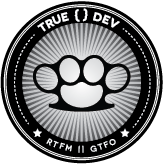 The ninth issue of the More Code Newsletter just went out. Here’s a run down of some of the articles that were included in this issue:

There’s a handful of additional resources in the newsletter, too!