One Step Towards Dependency Injection in WordPress

Dependency Injection is one of those programmer-y terms that sounds far more complicated than it is.

As defined in Wikipedia:

Dependency injection allows a program design to follow the dependency inversion principle. The client delegates to external code (the injector) the responsibility of providing its dependencies.

But think about it like this (because if you’ve used object-oriented programming, you’ve no doubt done something like this):

Class A now has a dependency on Class B and that dependency is only set during the instantiation process in the constructor of Class A.

On a small scale, this isn’t that big of a deal but as a plugin or an application gets more and more complicated, there are all of these dependencies set in the system without any way to necessarily test them in isolation.

And don’t get me wrong: There should be some cohesion among objects in an application, but the degree to which they are coupled should be small. There are a lot of reasons for this many of which are outside the scope of this post.

To help mitigate this, programmers have created all kinds of strategies to make sure that our classes can be small and focused and tested in isolation all the while working with other parts of the system.

Given the fact that dependency injection is one of those topics that has permeated software development for years (decades, even?), and it would only make sense that it’s something we should look at regarding WordPress.

At least, I think this is something that’s true for those who take an object-oriented approach to building solutions with WordPress such as plugins, web applications, and other similar projects.

And when it comes to talking about dependency injection, there are two ideas are discussed together:

In case it wasn’t clear earlier in the post, I’m not a fan of the term “dependency injection.” It sounds like classical jargon used by programmer-types in that it takes a simple idea and makes it appear more complicated. 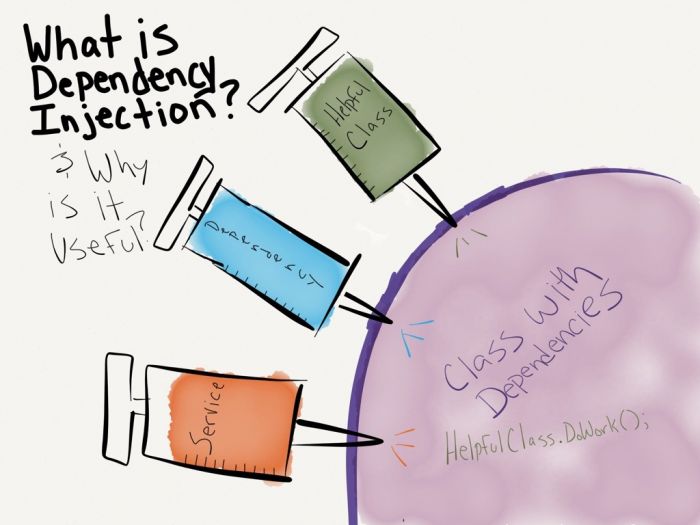 Most programmers, relatively early in their education – formal or not – in their hobby, or their career quickly understand the idea of passing variables into other functions. I mean, a function accepts parameters. We pass values into these functions which become the function’s arguments and then the function runs its algorithm using these values.

But when it comes to passing references to objects into other objects, it stops being referred to as an argument and becomes a type of injection.

Dependency Injection is often discussed in two main ways (though there really are more than that). And the two types that people like me (and probably those of you reading this) talk about are:

And though it’s a simple idea, one advantage to doing this is that the initial class is no longer responsible for instantiating its dependencies. Furthermore, Class B is now passed into Class A such that we can instantiate it outside the context of Class A.

This decreases coupling, increases our ability to work on code in a more isolated manner, allows us to have a greater degree of testing, and makes it possible to work on more advanced things such as creating mock objects and other strategies that are outside the scope of this post.

This is where the idea of dependency injection gets a bit more complicated. The ideas behind it are very useful, and there are some tools, libraries, and other tools available for us to use.

But before going that far, I’d rather talk a bit about the concept of a dependency injection container and how we can write a simple one for smaller projects. Then we can talk about some of the third-party libraries that are available.

This is one area in which I really think WordPress plugin developers have the opportunity to make massive improvements in the organization of code. Myself included.

Unfortunately, so much of the material about this kind of stuff that’s available for reference via Google is still complex or uses just as much jargon as the title of the topic at hand.

Hopefully, what I’m discussing here and in future posts bucks that trend. But if not, don’t hesitate to let me know in the comments.