Comment Humility is one of those simple plugins available for WordPress that does one thing, does it well, and doesn’t disrupt your current workflow. 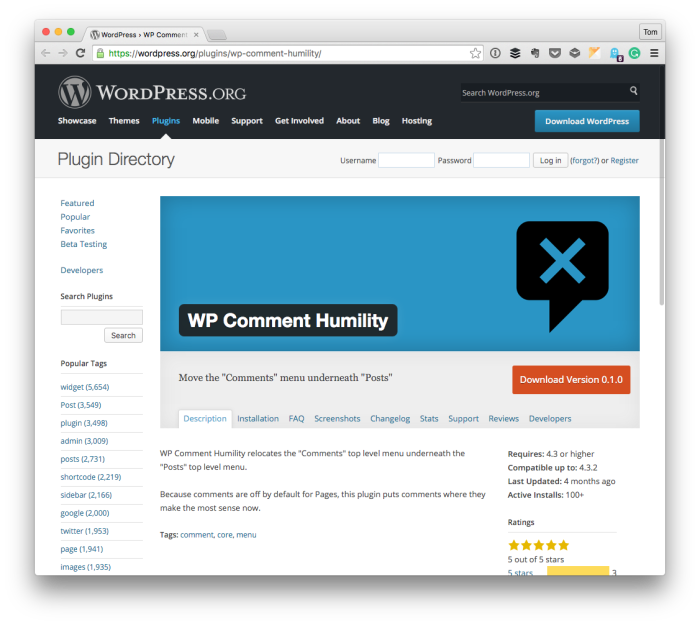 Personally speaking, it’s one of those things that I don’t know why it wasn’t developed sooner (or maybe it was, and I missed it).

Here’s the gist of the plugin straight from the repository’s page:

Because comments are off by default for Pages, this plugin puts comments where they make the most sense now.

Easy, right? But why does this deserve a blog post?

One of the things that always attracted me to WordPress is part of their cornerstone philosophies: Decisions, Not Options.

In short, I’m a big fan of opinionated software. This is what initially drew me to the Rails community years ago. And though I do think there are times in which WordPress is less opinionated than it could be I think it’s moving in the right direction. This is the nature of development.

But when I find plugins that are simultaneously exploring what it might look like to make WordPress more opinionated while simultaneously adding something that improves my workflow, I can’t help but appreciate it.

The neat thing about this particular plugin is that it’s part of a suite of plugins that @JJJ is working on as part of his Stuttter project. WP Tavern has a great write-up on the whole thing that I recommend reading.

Ultimately, the idea behind the plugins is this re-imagining of what WordPress could look like from the outside inward. I’m not talking about drastic changes, but small things here and there that may ultimate improve your workflow.

I don’t think it’s necessarily for everyone. After all, some of the plugins are more relevant to, say, bloggers than to someone who may be using WordPress as a more general CMS or application foundation.

But if you’re in the former camp, I believe you owe it to yourself to see the work that’s being done by John. It’s excellent stuff, and I’m excited to see what it goes and what more comes from it.