In the first post in this series, I talked all about how I wanted to tackle about an introduction to object-oriented programming within the context of WordPress.

There are some great resources for object-oriented programming but they can use contrived examples, or they can move too quickly for those who are just looking to get started.

In an attempt to keep this from happening, I think talking about OOP in WordPress anchors us to a strong foundation and using practical examples will always be better than using generic examples that are difficult to translate to the domain in which we’re working.

For those who’ve yet to join or who haven’t caught up just yet, the first post hits on the following topics:

And that’s where this post is going to pick-up.

END_OF_DOCUMENT_TOKEN_TO_BE_REPLACED

When I first set out to offer memberships on this site, I knew the first thing I wanted to tackle was an introduction to object-oriented programming.

It’s something that seems to be interesting to most people who are working in WordPress, but there’s a problem that either turns a lot of people away or generates poor results:

Object-oriented programming can get complicated fast. And this gets demotivating.

Here’s what I mean: Say you’re a WordPress developer who starts to research object-oriented programming. It starts off talking about classes and constructors and functions, and all seems well.

But then it quickly gets into:

It snowballs, doesn’t it? And that’s not at all how it has to be, but it’s hard to find a proper introduction save for a few resources that are out there. 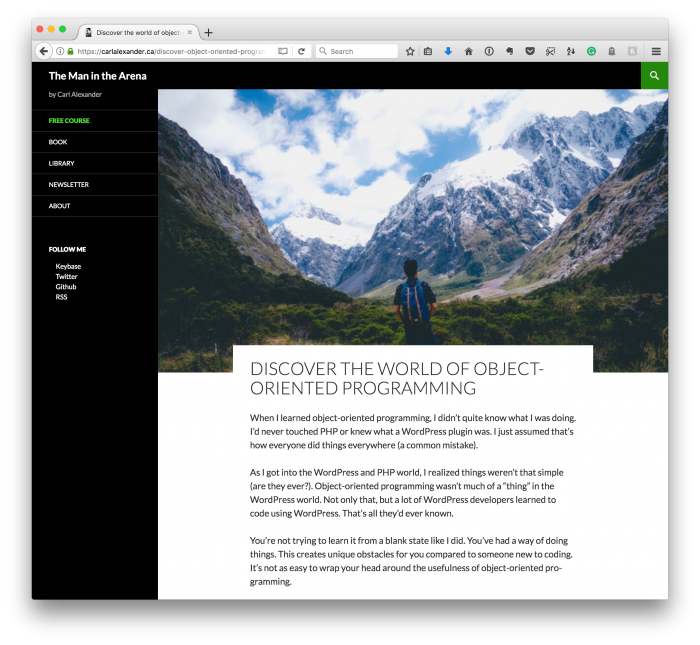 With all of that said (and serving as a backdrop for where I’m headed), I wanted to set out to create a series of content for those who:

And that’s what I’m starting today and in the first major serious planned for members. With all of that said, let’s get started.

Specifically, let’st started talking about object-oriented programming, analysis, design, and why she should start there.