Scheduling Time (With “Less, but Better”)

This weekend, I was talking with a friend who runs their own small business, and we spent some time on the topic of scheduling time and how much of our time we spend on different tasks each week. 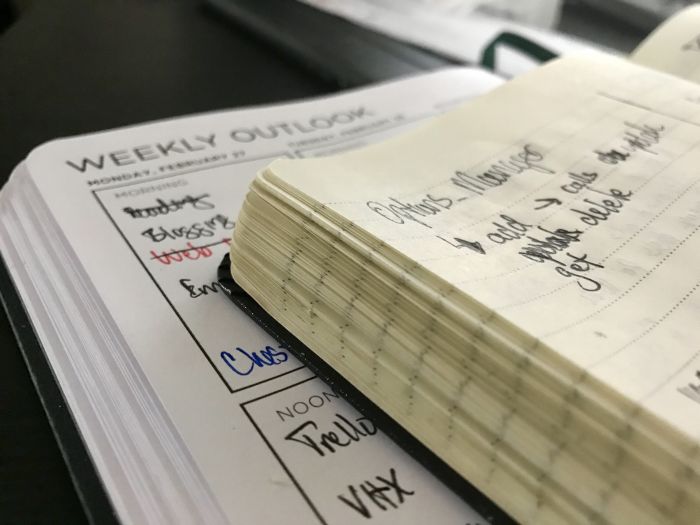 Of course, this isn’t unique to a few group of people. I mean, we all have the same amount of time, and we’re all spending it on something. When we’re trying to be productive, it’s often a matter of:

I mention this because we’ve all felt that bit of frustration, right? We’re trying to get something done but we get interrupted, and either can’t find the groove to get back into it, or we can’t finish what we set out to do by the end of the workday (or whatever deadline we’d set).

And this year is one of those where I’m trying to be far more intentional and make a more concentrated effort on how I’m organizing spending my time.

First, I’ve been reading Essentialism, and one of the concepts (if not the overarching concept) that I like from the book is:

The premise being that there’s really only so many things we can do, many of us are all trying to do too much, and if we cut back to the things that are truly important and that maximize our contribution to the key areas of our lives (including work), then we can do better work.

When I began to take stock of my calendar, how I was scheduling time, where I was spending time during the day, and how I wanted my week to look, I noticed that I spent a lot of time towards the end of last year in both email and on the phone (and my RescueTime logs can attest to this).

This first thing I decided to do was to set aside time at the beginning and end of each day to dedicate to email. I don’t spend the whole day in my inbox, and I don’t respond to emails as I receive them.

This doesn’t mean that I don’t periodically check in or have notifications for particular types of email, but emails are rarely urgent so why treat them as such?

The second thing I opted to change was phone calls. Depending on the nature of your job, phone calls might be a major part of the routine.

For me, not so much.

This isn’t to say that I don’t need to be on a call (I mean, we all do at some point), but how much time should I really be spending on the phone? Is it helping to grow the business, is it contributing to the proverbial bottom line, is it helping someone else out, is it wasting time, is it helping me make the best contribution possible in the areas for which I’m responsible?

And in many cases, it’s not. So what I’ve aimed to do is try to cut down any non-standing meetings to one call per week. The way I described it to my friend mentioned at the beginning of this post is:

One of my personal goals for 2017 is to limit myself to one call a week. Last year, I spent too many times on phone calls that didn’t pan out into anything.

Aside from being arrogant, it’s also false.

It’s about priorities, though. Out of the things for which I’m responsible, I need to make sure I’m diligently spending my time in places that are best for all parties involved. It’s that whole “maximum contribution” and “less but better” thing.

Ultimately, it’s not “no, I don’t take calls,” it’s “yeah, I’ll almost always take a call” and then it’s a matter of finding time on the calendar to do it. We all schedule our time, so why not find a time that works well for both parties involved rather than inconveniencing either one?

None of the above is meant to be prescriptive because I’m not in your situation any more than you’re in mine. But, this year, I’m doing what I can to share more about how I’m spending my time doing what I do and the rationale behind it.

And, as mentioned earlier in the post, how I’ve opted to field phone calls relies heavily on concepts from Essentialism, from others with whom I’ve spoken, and with lessons I’ve ultimately learned the hard way.