I just finished a feature for a project that uses a combination of custom post types, data imports, and updating existing posts when deleting a user (or set of users).

There’s one problem, though:

Say have you have a post that’s currently published (that is, it’s ‘post_status’ is set to ‘publish’) but, when you update the post via wp_update_post, its post_status attribute is set to ‘future.’

Generally speaking, I’m not a fan of getting something to work, finding out that it does, and moving on to the next task unless I understand exactly why it didn’t work [as expected] in the first place.

This isn’t to say that there aren’t times where constraints have caused this to happen (at least during working hours). But if it’s midnight, I fix a bug, and then I’m not totally sure I understand why it was apparently broken in the first place, I might as well stay up and figure it out right?

It’s like the programmer’s version of sunk cost bias.

Anyway, as outlined above, here’s the gist of the problem:

Everything works great except there’s a problem: Whenever the post is programmatically updated, it marks the post’s status as ‘future’ in the database ultimately setting the post’s line item in the All Posts view as “Scheduled.”

There are two ways to fix this problem:

If you opt for the second solution, then explicitly update the properties of the post object before passing it to the update function.

I’m not one to say there isn’t a place for either of these solutions when working on a project, but the question remains:

Why is WordPress marking a post scheduled for the future when the post, before going through the update procedure, was set to publish?

And if you’re not familiar with the rest of the arguments that are passed to WordPress when updating a post, it will take some time to track it down.

For the sake of avoiding writing a direct database query, I opt to go with the second solution because it’s cleaner (though it doesn’t make it any less confusing).

To figure out why this behavior happens, you can ask another developer or debug the code. Given that I was working on this late at night, I opted for the latter. 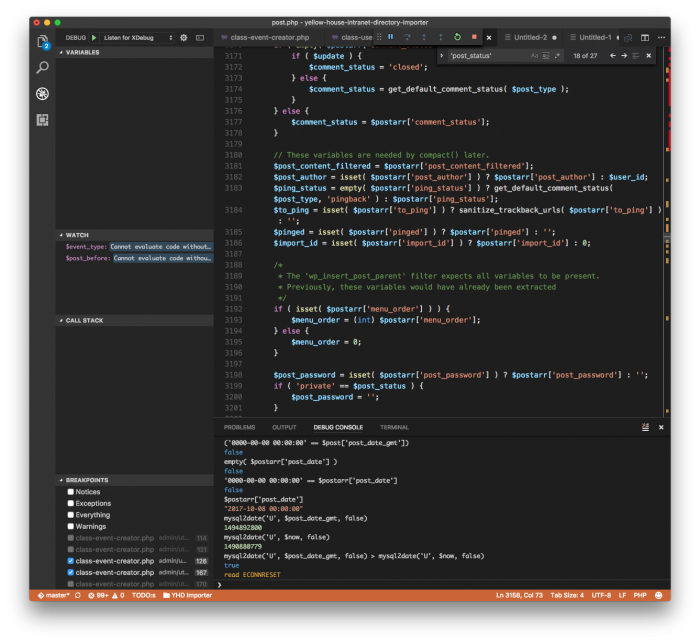 Running the debugger and tracing code through post.php.

I’m not going to talk through all of the breakpoints and watches that I set, so I’ll try to make this as concise as possible.

First, when the code runs through the wp_update_post function it will encounter this block of code:

Now there’s a variable, $post_status, maintaining a value of publish but it’s not assigned to any particular property of the current post. If you continue tracing the code, you’ll come across the next line:

Here, you’ll see that it’s working with a set of array keys that are contained in the $postarr variable. This variable is used earlier in the code (see it here on Trac). And if you look closely, you’ll see that it first checks to see if the post_date_gmt property is empty or if its all zeroed out.

And since it’s not, it will use the value that we specified on the property when we initially called the function:

Why go back up into the function when the code has already run past this? That’s the nature of debugging. Sometimes you see variables and don’t think anything of them only to see they are used, set, manipulated, combined, or whatever else later in the code.

That’s the reality of it.

But anyway, because of that, the property will maintain the value that we supplied before calling the update function. Usually, this will be the same value as when the function started, but there may be times where you want to, say, trash a post.

And that’s grounds for using wp_delete_post. But it has its caveats, too especially around custom post types.