The Spectrum of Open Source Philosophy

To me, one of the most interesting aspects of open source culture is the variations in open source philosophy we all have.

Then, as expected, there are a lot of things that sit between these two points. You know: The proverbial gray area.

As of last week, an interest article has been making the rounds about Slack and FOSS projects. I’ll talk about it more in a moment.

But first, since I’ve never written about my own perspective on open source, I thought I might as well try it.

To be honest, I don’t know if there’s one true open source philosophy. I opted to include that as the name of this post because it seemed fitting.

As mentioned, there’s been an article about Slack and IRC that’s making the rounds. It’s called Please don’t use Slack for FOSS projects and it’s worth a few minutes of your time. 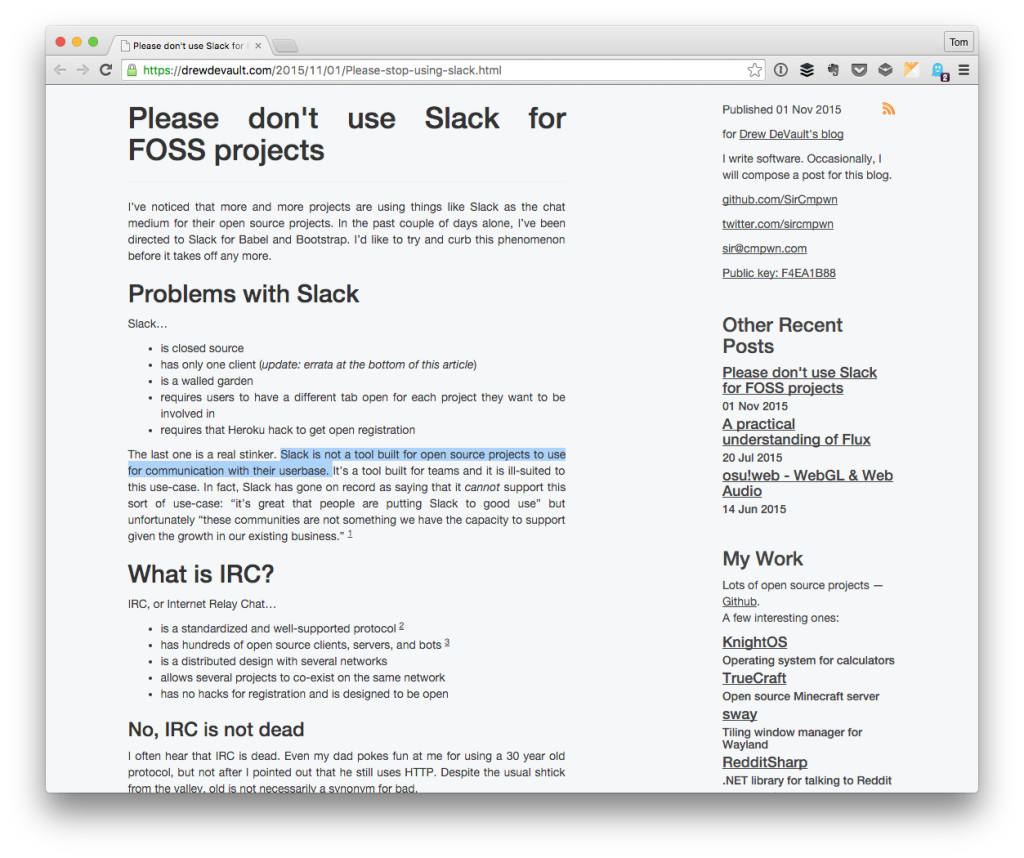 A word of caution, though: Do not go into reading the article with your guns loaded. Instead, approach it with an open mind.

Slack is not a tool built for open source projects to use for communication with their userbase.

It’s not a political software piece. At least, not as far as I’m concerned. It’s a well-articulated piece as to why a chat client like Slack isn’t ideal for communities.

During my time in working with WordPress, I’ve met people from all over the world. And these people have varying perspective on anything and everything.

I love it. It stretches you as a person.

One of the things that I’ve noticed is that some take an “open source and nothing else” stance. That is, you’ll find them using nothing but open source software on their machine.

This includes operating systems, productivity software, development environments, and so on.

I don’t know if I want to call this “extreme” because I think that term often carries with it the implication of lack of rationalization on taking a stance.

I tend to favor the term “purist.”

Anyway, I’ve found that this “lack of rationalization” couldn’t be further from the truth. Many of the smartest people I’ve met in open source hold their stance via logical reasons.

If I was to classify my own stance on software it would be one of utilitarian. That is, though I appreciate, use, and build solutions for others using open source, I’m no purist.

Don’t try to derive any political statement from my including this comment. :)

Case in point: All the work that I do is on a Mac. Much, though not all, of the software that I use is software I’ve purchased and is closed source.

I know some who hate the idea of participating in open source and using a Mac (or other proprietary system). It seems completely incompatible. Others don’t care that much.

I get both perspectives, but my utilitarian nature is one of trying to find a tool that works best for the job.

And that’s what it comes down to for me.

If a piece of software has a great user experience, attractive user interface, and helps me be more productive, I will use it. It doesn’t matter how it’s licensed.

But there’s a tension: What if an open source alternative provides the same experience?

Would I pay for it?

I believe in supporting the work of other people so that they can continue to work on the projects they love. When we do that, we provide resources for them to continue to build out the software we use. Further, it comes back to help us because its software that helps us continue to be productive.

Wait, What About Closed Source Ethics?

This topic can often spiral out into why closed source is bad, why open source is good and so on. That’s an important conversation to have, but this is not the post for it.

The lack of writing about something is also not indicative of one not thinking about it, either.

The purpose of this post, though, is two fold:

Of course, I’m interested in hearing your own take on open source, where you fall, and why. I’m not interested in debating why someone is wrong or right — I’m just curious about where we all fall.

So, as I’ve stated, I tend to be more utilitarian. How would you label yourself?