One Month with Boxy (Inbox By Google)

If there’s one thing about which I’m consistent, it’s consistently trying new things and moving something that better fits my workflow whenever the need arises. And such is the case with Boxy. 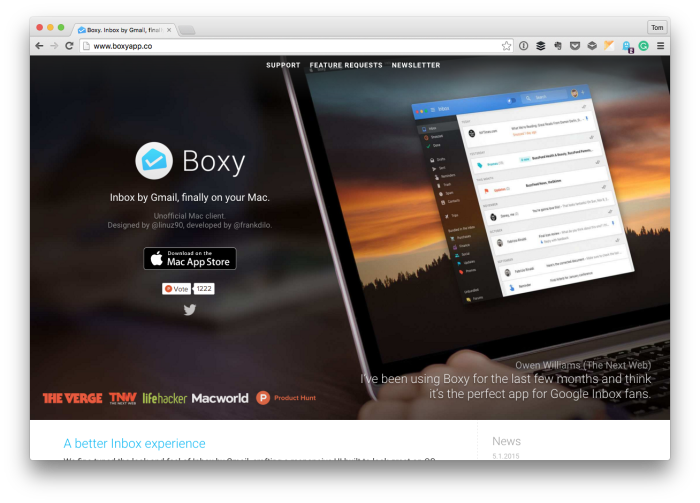 But let me back up: A few months ago, I talked about Kiwi. A desktop Gmail client for Mac that I [still] think is great if you’re a fan of the original Gmail interface (that is, say, in contrast to Inbox).

It’s a personality quirk, I know.

But still, the only available versions were the iOS version and the version that ran within a browser. Now don’t get me wrong, I’m a big fan of web applications, but there’s something about having email as a separate application rather than a browser tab that works better for me.

Anyway, a little over four weeks ago, I came across a little app on Product Hunt that claimed to bring Google Inbox to the desktop. Being inexpensive, I bought it.

And I’ve been using it exclusively ever since.

When it comes to accomplishing tasks, it doesn’t matter if it’s something as menial as checking email or something more complicated like working on a project around the house or managing a business, I work my absolute best when I follow the “getting things done” approach to, y’know, getting things done.

Other people have their techniques and that’s awesome. I’m definitely not saying that any one is better than the other. What I am saying, though, is that Inbox (and like Mailbox before it was acquired and basically destroyed) has always fit my workflow really well.

The problem is that I wasn’t able to maintain my workflow when moving from device-to-device. And that’s a big thing to me. You know: The whole consistent user experience thing I mentioned earlier in this post.

But now I can do so. And since I’ve been able to, I’ve been using Boxy on my desktop and Inbox on my devices, and I’ve been pretty happy. On top of that, Boxy has undergone a major update in the four weeks I’ve been using it.

My Experience with Boxy

So what’s my official take on the app as it stands today? In short, I’ve practically nothing negative to say, and I’ve a lot of positive to say.

For any critiques I do have, I do so openly acknowledging that the team behind the product is actively developing it, welcomes feedback, and incorporates what people are sharing via their support channel.

When it comes to using an application, there are usually two aspects that I consider when using it especially for a significant period:

Generally speaking, Boxy isn’t bad with memory consumption. It’s speed – even with a lot of email sitting in the Inbox (or any of the various bundles or boxes or whatever you want to call them) isn’t bad.

There is some noticeable lag, but it’s nothing that slows productivity. Plus, I’d say that if you’re weird like some of us and never delete your email, and you heavily rely on search, you’ll be content with Boxy’s performance.

Since this feature is basically the backbone of all things Google and Boxy sitting on top of it, I’d be remiss if I didn’t mention it.

After all, what’s a Google-based product without a search feature?

The search functionality is great. It’s accurate, it’s fast, and it always returns what I set out to find. In short, it performs exactly as you would expect if you were working via the Inbox application in the browser.

I don’t use multiple accounts in the traditional sense. Instead, I funnel all email accounts into my Gmail account, and then I reply-as based on the addressee of the email.

Boxy’s support for this is exactly what you’d expect. I mention this because it was one thing that I’ve noticed some clients don’t get right. But Boxy does.

To that end, it makes it that much easier for me to handle email as it comes in regardless of the address. Nailing this out of the gate was key, in my opinion, and I’m happy to see that it delivered.

When it comes to the tech community, Markdown is a funny thing. People who use it think it should be everywhere and those who have never heard of it don’t know what it is or why they’d want to use it.

It’s basically a subset of HTML anyway, so why should they want to use it?

Though I recognize that, I can’t help but say that I’m someone who uses Markdown in as many places as possible (including when drafting blog posts – so glad WordPress supports it :).

When it comes to using Gmail or Inbox in the browser, using a Chrome extension makes it easy to add Markdown to your emails, but not so with a desktop client.

Right now, Boxy does not support it, but they do have the usual shortcuts available for formatting text. That said, Markdown is coming.

Right now, embedding media is a little clunky. If you’re replying to a user inline, you have to pop the reply into an inline window and then drop the media into the window as an attachment.

It’s not ideal, but it does work, and it works well.

I’m sure that, over time, this is one of those things that is something outstanding refinement, though it may also be bound by some of the constraints about which I’m unaware.

To be sure, this is something that’s very minuté to complain about, and you don’t even really notice it unless you’re sending quite a few files to people or when you’re having to send a batch of files to people when working through your email.

Ultimately, I love Boxy. This should be evident by everything mentioned above. I think that it’s a solid desktop application for anyone looking to bring the whole Inbox experience to their desktop, and it definitely fills a gap that Mailbox tried to fill.

When it comes to getting things done, Boxy helps in all the ways it should and does so without trying to do any more than it – or Inbox – was designed to do.

So, yeah, I’m a fan and will likely continue using it for the foreseeable future.