Writing beautiful code in WordPress is a topic that any programmer, at some point in his or her career, is going to consider. I say this if for no other reason because it’s something that’s almost a right of passage for any programmer.

When it comes to writing code, there are some who get into it because they have a real love for solving problems using computers. Others get into it for others reasons. Maybe it’s because someone urged them to do so, maybe it’s because technology is going to continue to be ever present in our lives.

If you’re of the former, then I think your appreciation for code isn’t as high as for those who get into it for a different reason. I’m not trying to generalize, but I’m speaking from observation.

So anyway, when it comes to writing beautiful code in WordPress, how do we even go about doing that?

Early in my career, I used to be somewhat pre-occupied with the idea of writing beautiful code. That is, I wanted to write beautiful code, but I didn’t know what that really meant.

But here’s one thing I do know:

Part of writing beautiful code is adhering to a standard such that the code looks like it could have been written by any of the developers working on a given team or at a given firm and so on.

This doesn’t hit on all of the points mentioned above, but it does hit on the aspect of readability and clarity, and that’s something that matters. 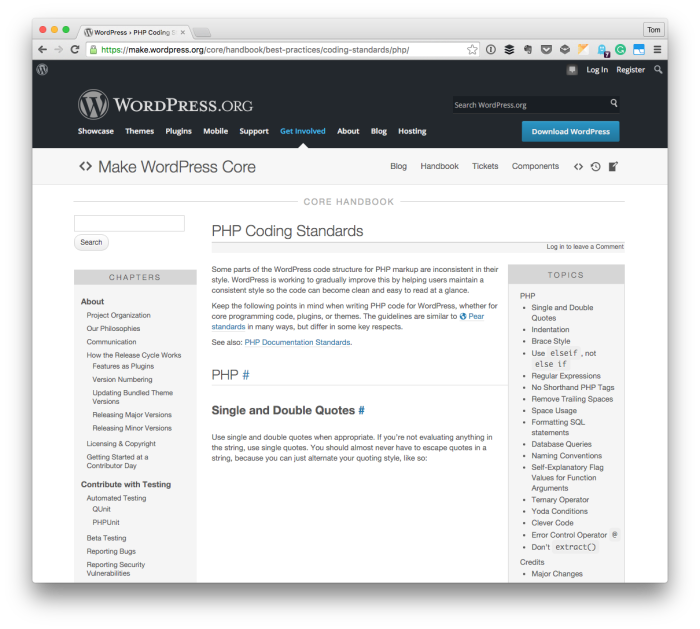 If you’re looking for ways to at least start writing beautiful code in WordPress (for what it’s worth, I think it’s a career-long journey versus actually arriving at a destination), then why not start with the Coding Standards?

They exist for a number of reasons, but one of them is to help us write code that follows a convention allowing all of us to both write and read code that looks a certain way, reads a certain way, and is easier to follow.