Earlier this year, I talked a little bit about how I deal with social media during the day-to-day. In that article, I shared that I’m a big fan of Path. In fact, I said this:

Months later, I’ve continued to scale back my social media involvement to the point where I’ve killed my Facebook account, I don’t use Instagram or any other social service, but have continued to use Path as they’ve continued to grow their service, and I’ve enjoyed every feature – and the frequency thereof – that they’ve rolled out throughout the year.

At this point, the only two social networks that I’m currently using are Twitter and Path.

To me, it seems that a lot of people want to use Path, but few actually do because their friends are on other social networks such as Facebook, Twitter, Instagram, or whatever else is popular right now. 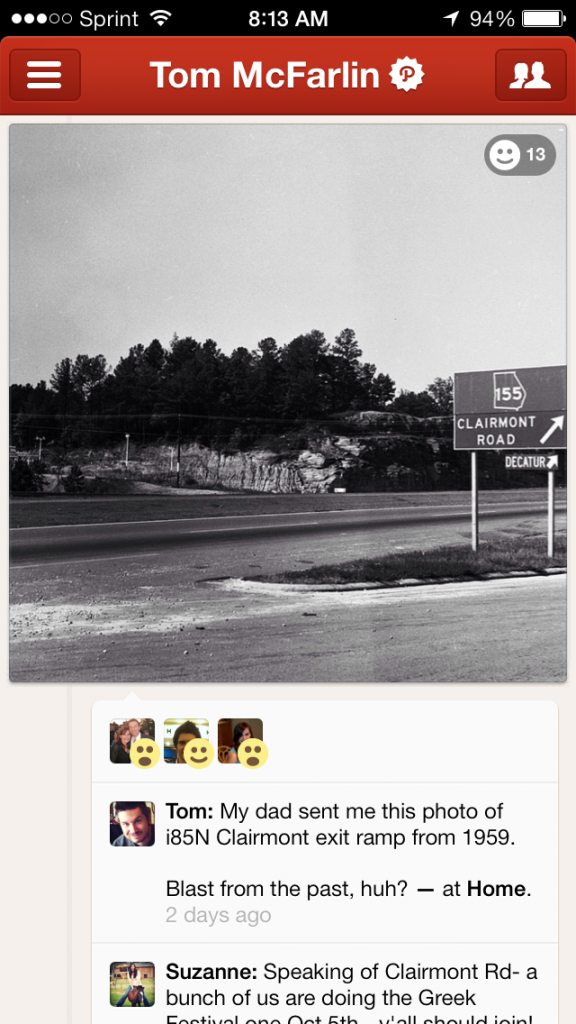 A shot from Path earlier this week.

From the beginning, I’ve been a huge fan of Path’s model:

Here at Path, our goal is to help you develop a high quality network to connect more deeply and share personal moments with your closest friends and family. We are inspired by Oxford University Professor Robin Dunbar, whose research delves deeply into the number of trusted relationships humans can maintain throughout life.

We tend to have 5 best friends, 15 good friends, 50 close friends and family, and 150 total friends. At Path, we’re building tools for you to share with the people who matter most in your life. Our intent is to nurture quality relationships to offer you the comfort to share all your personal moments.

Over the year, they’ve continued to roll out neater and neater updates until this past week they finally rolled out a paid subscription. And the moment it dropped, I purchased it.

But Seriously, Why Path?

Here’s the deal: For me personally, social media has potential to be a huge distraction. I’m not the type of person who does well cycling through four or five apps several times a day, or ignoring notifications, or however else any given social network program works.

On top of that – and I know this sounds callous – I’m not terribly concerned with keeping up with whatever is happened on Facebook or the pictures on Instagram. Each of those networks seem to promote connecting people that you may know well, may barely know, may know through someone, or may just like their profiles, their updates, or their pictures.

Of course, there’s nothing inherently wrong with that. I’m not even critiquing it! It’s just not my style.

And yeah, there’s plenty that can be said about “the other guys,” and ownership of data, how people act, what they promote, and all that jazz, but I’m not interested in that. And if I can be so candid, I’m also very careful about sharing pictures of my kids and family online just because it’s new territory.

No other generation has had to grow up online without their explicit permission (at least that I’m aware of), and I’m not sure I want to do that right now. But that’s purely and completely subjective, and there’s no disrespect for where anyone else stands on that.

Instead, I’d rather have a single service designed for close friends and family for which I can pay to keep advertisements away and to put money towards a service I enjoy.

Is It Worth The Cost?

Other than Path, Twitter is the only other service that I use. It allows me to keep up with those who I still am interested in following, but limits me primarily to using text, where I can share pictures, videos, locations, and other information with those who are closest to me in a private network.

The one caveat to it is that it did take some evangelizing to get my friends and family on it. This doesn’t mean that I went all out and campaign for it, but I sent a short email or dropped something in conversation about it and people began to use it – and they’re still using it.

In fact, I’d say the majority of the reason more people aren’t using is because they aren’t aware of it. But that’s just my opinion.

Maybe they will, maybe they won’t. The fact that they’ve raised Series C funding and the fact they are more interested in having users pay rather than introduce advertisements, promoted messages, or whatever you want to call them is a business model than I can get behind and leads me to believe they’re in it for different reasons than the other guys.

Maybe nothing gold can stay, but – for now – I’m a big fan of Path.

The Irony of Promoting a Closed Network

I know – the irony isn’t lost on me. Here I am talking about a network that I think more people should use; however, I don’t actually friend most people on it.

But this is part of my day-to-day and this series is about just that, so I think I can get a pass for discussing it, right? :)