Why I Still Use Path

About two years ago, I wrote about My Day-To-Day: Path and why I was a fan of the social network. Two years ago – which is roughly a decade in Internet years, right? – and a lot has happened since then. 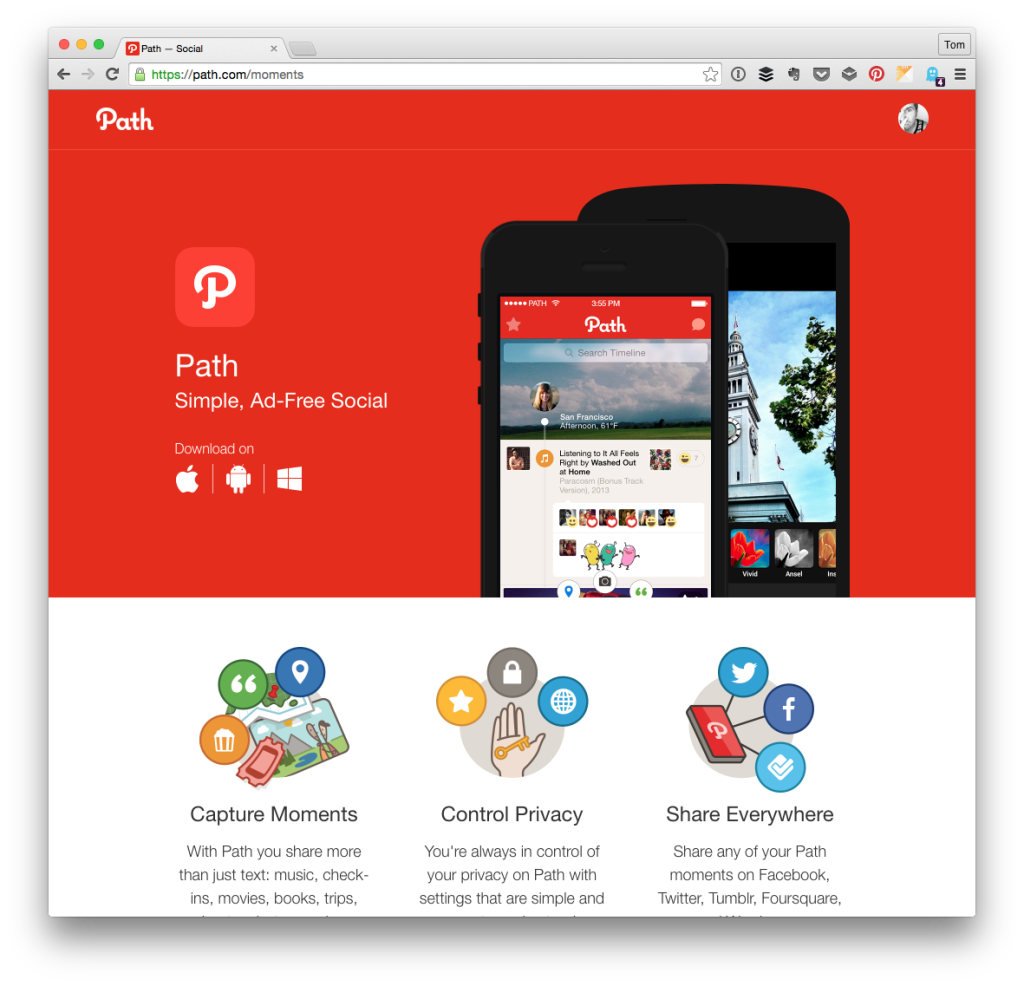 In fact, I stopped using the social network for a while, opted to start using it again, and continue to do so now. Occasionally, I’ll share content from Path to Twitter.

I did so a couple of weeks ago and received the following tweet:

@tommcfarlin Wow you still use Path. I thought that app was dead!

A completely valid opinion and one I’m finding more and more people are asking me about when they find out that I (and a few family members and friends) still use.

So I thought I’d write an updated post about Path and why I’m still a fan of the app.

Yes, I Still Use Path

Recently, Path did sell to another company – one that focuses on a market that’s outside of the United States – after which, I decided I was done using the application.

No, it wasn’t because the application wasn’t focused on the US, but it was because when an application and/or service sells, then it’s usually killed off and the data they’ve collected is harvested for some other reason or the application loses its initial focus, mission, and/or vision and then becomes something it previously was not.

I didn’t want to have to deal with any of that, so I opted just to check out and forget about it; however, my wife, a few family members, and some other friends continued to use it.

So after hearing them continue to talk about it and seeing not much had changed via various sources of news online, I decided to try it again.

Truth is, I did miss it because it’s uniquely positioned against the other networks that are out there (plus, I had a ton of moments that I’d shared).

They Continue To Update (Nice!)

Since I’ve continued to use the application, I’ve contacted support numerous times (mainly about feature requests) and have received responses very quickly.

On top of that, the application has been updated at least three times in the past two months which is more than it was updated previously. Some of them are minor updates, sure, some of them are more major (like when they stopped using FourSquare for the mapping system and started using Google Maps – which does result in faster performance).

Anyway, all of that stuff is nice and it shows the people working on the service seem to care about the application’s original mission and vision which is great. I always remain skeptical about how long it will last, but so far it’s been fine.

Why Continue To Use It?

Finally, the reason I continue to use Path is because I continue to dig the philosophy behind the application and for the same reasons I shared in my post from a few years ago:

The thing about Path is that some of my immediate family and my closest friends all use it so I’m actually able to get the benefit of using that particular application more so than any other.

And it’s fun to keep up with the close group of people I’m connected with via the service. No, it’s not like Twitter where I aim to try to talk with a variety of people and it’s not like Facebook (which I don’t even use), but I think that’s why I like it the most:

It’s a place to share pictures, music, TV shows, movie, moments, locations, and so on all in a single service and those with whom I’m closest.

It’s definitely not dead and though I don’t know what will happen over the next year or two, I hope I’m still a fan of it as much as I was two years ago and as much as I am today.