Three Reasons For Attending a WordCamp

As I’m decompressing from the whirlwind that was WordCamp San Diego, I’ve been going through notes and bookmarked posts on the topics for many of the things that were discussed.

Taken at La Jolla Shores one evening after the conference.

But my mind is also drifting to several emails, messages, and notes I’ve received this year about those who are interested in attending a WordCamp but have yet to do so for one reason or another.

Though I’m considering writing several posts over the course of this week all related to the material covered at the conference, I thought it might be worth sharing some of the reasons that I enjoy going to WordCamp.

Reasons for Attending a WordCamp

Each time someone publishes a post like this, it’s always going to be through the filter of their experience.

I’m certainly not naive to that, but after attending several WordCamps over the last few years, I’d like to think that I’ve had enough experiences that fall on the spectrum of being “Man, that wasn’t very good” to “I’m glad I attended that conference.” 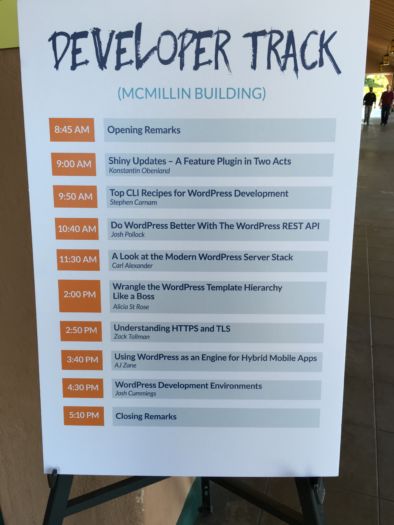 The talks for the developer tracks on the first day of the conference.

Furthermore, I’m also going as a developer. I’m wasn’t attending through the persona of a designer (because I’m not one), a blogger, or as a business-person (though I will say that my interested in business tracks has increased over the last few years).

That said, the things I’m going to share are from that perspective. That is so that that this is not a definitive guide, it’s not targeting all of the different types of people who may attend, and it’s not trying to pretend to be anything other than my experience.

If you work with WordPress (or any set of technologies, really), day-to-day and you’re in the thick of it, it’s easy to begin to feel a bit like you’re trudging through mud (because you’re “in the thick of it“). And when that happens, it’s often hard to feel as excited as you did when you first hopped into the technology.

That’s natural, though, and I think it happens to anyone and everyone. Eventually, the newness wears off, the honeymoon phase is over, and you’re working with the technology stack that you’ve chosen, and all that comes with it.

To say that the field of technology is not replete with its share of technological and social challenges would be an understatement. And those challenges are important. When you experience them or are aware of them, they can wear on you.

But when you’re getting actual face time with people and you’re able to sit and talk at length with people about many of the same things we’re used to seeing on a day-to-day basis, it helps bring a fresh perspective and it helps renew the excitement around something.

Regardless of what it is that you do with WordPress, you’re going to find people who are doing the same things you are and who are excited and willing to talk with you about it. Often, this happens at length, will last through another session possibly even into dinner (or wherever you opt to hang out during the evening).

2. The Wisdom of Others

When you listen to other people give a talk in the same field in which you work or in which you’re interested, you can’t help but be inspired or be reminded about certain things that are relevant to you.

For example, Konstantin Obenland presented on the topic of a plugin called Shiny Updates (something I’ll talk more about in a future post), and Pippin Williamson did an AMA regarding plugins. Because so much of what I do is around building custom plugins for others, there was a lot glean from both of these talks.

Although Konstantin talked about a particular plugin versus general practices, he talked about some of the things that have gone into the project. Furthermore, he talked about how the plugin was architected and called for those in the audience to give it a try if it fit with their workflow.

Pippin’s talk covered both technical and business answers both of which are relevant to those who work for a company, are self-employed, are a freelancer, and so on.

Ultimately, when you’re able to learn from the wisdom of others who have experienced things before you or who have attempted something that has worked out well, it gives you something to take back with you that you can begin incorporating in your work.

I know: I said that I was going to list three reasons (which I have), but I’d be remiss if I didn’t cover the significance of being able to meet other people face-to-face.

And there are more people (so if I’ve left you off the list, I apologize). But this is an example of just two days at a conference.

This is an utterly incomplete list of things to look forward to when attending a WordCamp, but they are things that are part of the experience. And sure, I could go on about what it’s like to hang out at lunch with people who I’ve often only met online:

At #wcsd I had a great lunch with @twigpress & @tommcfarlin talking about development and writing about it. Major #highlight

Or I could talk more about what it’s like to talk shop on an airplane for three hours:

Talking shop with Carl on the plane to a layover in Houston.

Or I could continue to go on about all of the talks I heard and share all of the notes I took, but that would ultimately belabor the point.

Instead, the biggest point that I want to make regarding attending a WordCamp is this: Regardless of what it is that you do with WordPress and your level of experience or exposure to the community, there is plenty to learn, great people to meet, and good experiences to be had.