Close The Gender Gap in STEM

For anyone who is involved in technology right now, odds are that you’re aware of the gender gap in STEM (science, technology, engineering, and math). It’s a hot topic – and it should be – but the degree to which you’re aware of it probably varies.

At least, that’s what seems to be my own experience.

Personally, I’m actively working to educate myself on the topic; however, I’ve spoken with a number of women in tech who are much more aware of the issues than I am and who are willing to help educate. 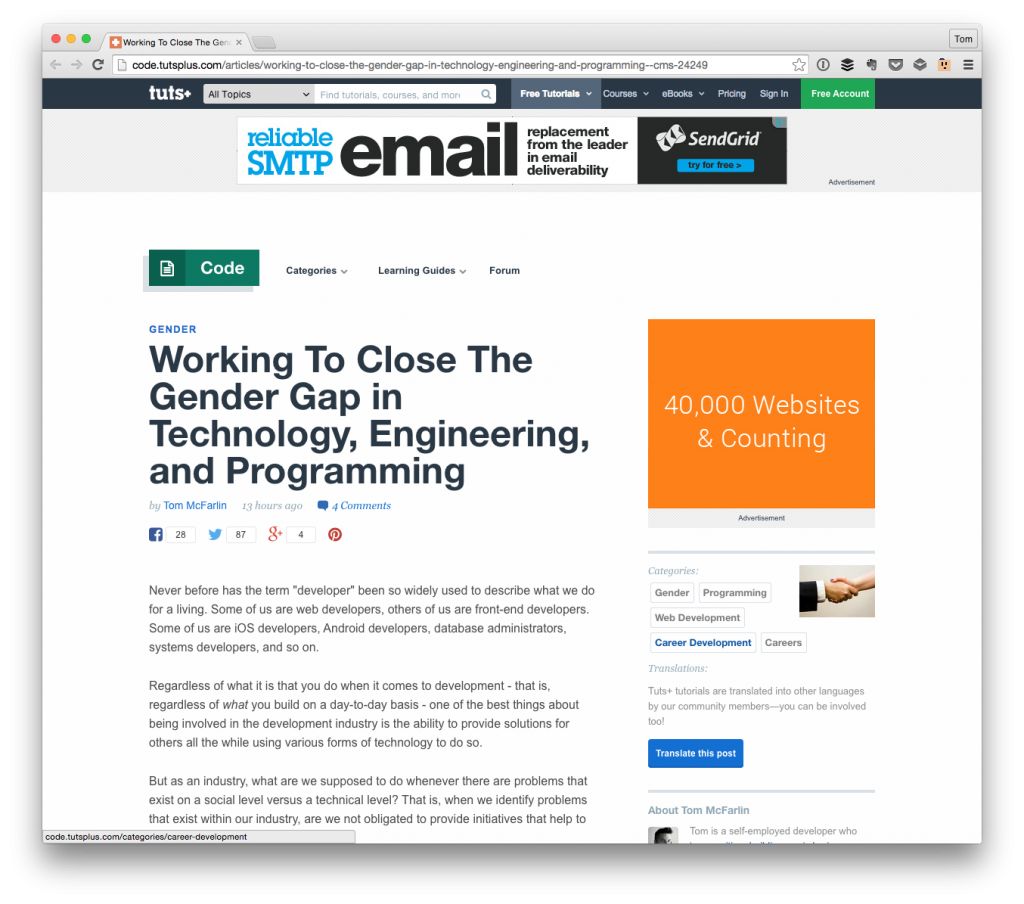 If I can be honest, I’ve a vested interest in the topic for a couple of reasons: First, I have two daughters both of whom I want to grow up in a world in which they are able to pursue their interests regardless of where they may be (and I will do everything I can to make sure they have those opportunities). No, I’m not forcing computing on them, but if they show an interest in the field, then I will certainly make sure they are educated and equipped for it.

Secondly, because the gender gap does exist is something that we should be rectifying. It’s true that technology tends to be a male dominated field; however, to write it off and to say that it’s simply because more males than females are interested in technology is oversimplifying the problem (and I believe it to be intellectually dishonest).

Clearly, I’m not the most qualified person to help propose solutions to this problem, though I do believe I can do what I can to help – to partner with those who are far more aware of and educated on the issue than I am – and to provide resources to help begin narrowing the gap so that one day it may be closed.

And that’s what I’ve attempted to do in my latest article for Envato.

The Gender Gap in STEM

A few months ago, I was approached by Envato to write a topic on the issue of women in technology. Given all of the issues above, this is something that I was definitely interested in writing about, but I wasn’t even sure where to start.

As I tried to tackle it from a number of different angles, I realized that my best course of action would probably be to start with the basics – that is, I asked myself:

What would I want to know if I was someone who was just starting out looking for resources to get more women (and children and minorities, to be honest) into technology?

Granted, this particular article focuses on the gender gap but you can’t help but notice some of the disparity as you begin your research. But I digress.

It’s a basic question, I know, but the truth is that many of us who are interested in doing just that aren’t exactly sure where to start. So why not start at the lowest level possible – I mean, wouldn’t that at least help get the ball rolling on the conversation and thus potential solutions?

So I ended up reaching out to a number of different women who are successful and who are well aware of the resources available to those who are looking to get into technology. Furthermore, I made sure I spoke with women who were in the United States, Europe, Australia, and other places.

No, I didn’t get a chance to chat with all of the women in tech that I know – and I’m fortunate to know a few who are smart, well-equipped, and willing to help – but I was able to speak with a decent number of women all of whom helped to provide me with content, interviews, resources and so on.

They’ve asked to remain anonymous thus the article may stand on its own rather than bringing certain individuals into a conversation that could bring about a political discussion because that’s not what this is about but I do want to publicly thank them (as they know who they are) for their contributions to the article.

During college, I majored in computer science and was fortunate enough to go to a school that worked hard to make sure that diversity existed within the College of Computing. It was really neat to be able to watch the program start and grow from a first-person perspective. 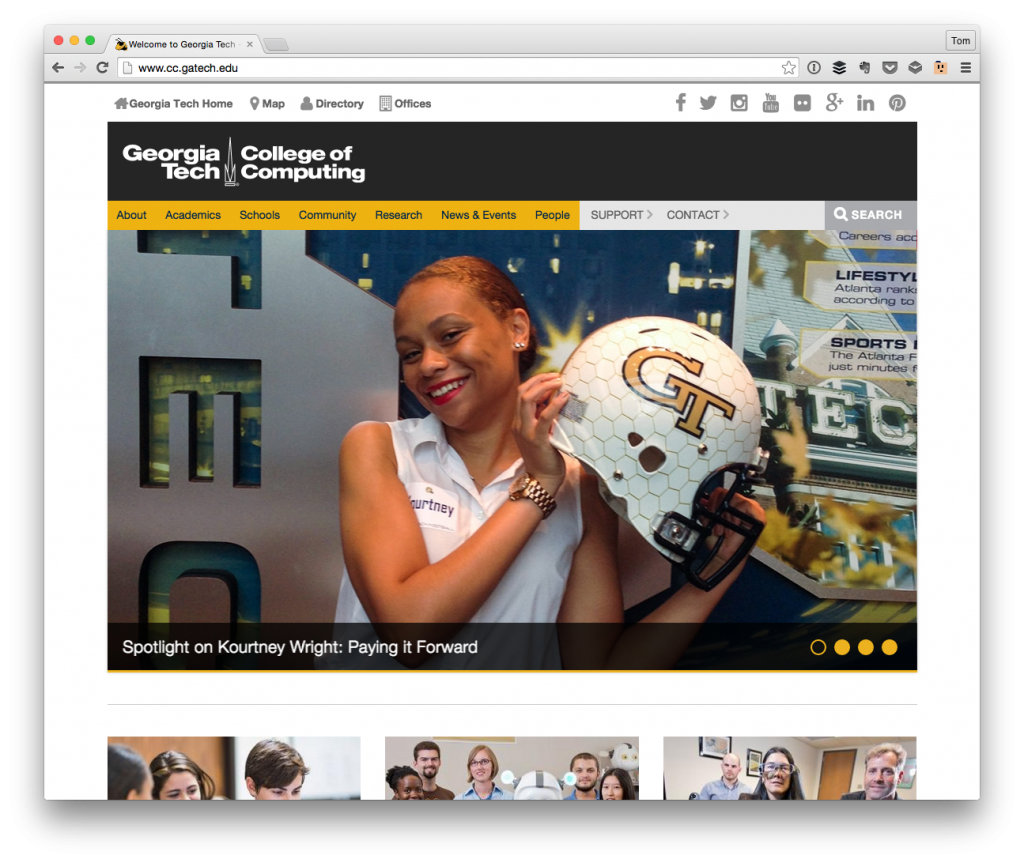 Then, right out of school, I had an opportunity to work with a number of female engineers during my first job, so the presence of the gender gap within this field is something that I didn’t realize was as wide as it was until I began to get involved in open source and began to talk to more and more people around the country and around the globe.

I do think there’s misleading information that’s out there – this is true of any facet of social issues – but that doesn’t mean you discount the heart of the matter and that is that there is a problem and we should work to address it.

How we go about doing that is something that’s more complex, in my opinion. For what it’s worth, I haven’t even processed enough information on my own to come up with something that I consider to be even viable within a topic of conversation.

But I do believe that education plays a huge role in the field (as do parents) and so focusing on implementing programs early rather than later is a good thing. I don’t think it’s enough, but I think it’s a start.

And so, bringing all of this full circle, this is why the article that was drafted takes the approach of simply making the reader aware of the issue and then sharing resources that are available.

Here’s the thing: There is absolutely no way that I could capture all of the resources that are available that are out there. These resources may include boot camps, educational material, and so on, but there’s also a lot of research, groups, and so on that are worth covering, as well.

So if you’re someone who’s familiar with this field, has experience with it, and are willing to share whatever resources you have available, then please take some time to leave links in the comments of the original article.

A Note About Comments

Comments on this post have been closed as I’d like to keep the resources on the original article.

Note: The points and resources shared throughout the article are not intended to spur any type of debate. It’s meant to be a resource – an informational piece – for those who are looking for a place to start. As such, all comments that attempt to discuss the social and political aspects will be moderated.

There’s certainly a time and a place for that and I encourage that discussion, but not within this context.

Instead, please offer your resources so that those of us who are looking to better educate ourselves about the issues and to work to close the gender gap in STEM have the ability to do so.